Review of "Her Wish Is Your Command" (short story collection) by D.L. King

If you aren’t close friends with a writer, let me explain something to you; we’re needy, nerdy, and tend to believe that what we write is somehow, how can I put this—crap—even when faced with publication credits to the contrary.
(D.L. King, from the introduction to Her Wish is Your Command)


Bondage, female domination and voyeurism are the author’s unifying themes, whether pursued as a profession (The Tao of Lust, Mistress of Carabas) or spiritual passion (Perhaps—A Worthy Offering), a lark for curious tourists (A Different Kind of Reality Show, Private Viewing), therapy (Mr. Smith, Ms. Jones Will See You Now), or the creative pastime of adventurous married couples (Festival of Lights, Big Night). King has a gift for revealing the sensual essence of the commonplace.


Most of these stories feature contemporary urban settings. King is very much at home in the clubs and converted loft apartments of Brooklyn. Her characters are more often than not relatably bourgeois, occupying a world somewhere halfway between the sterile high-rise heaven of New York’s most extravagant conspicuous consumers, and the ant-like working stiffs who struggle in the streets below, whose unstinting—and mostly unseen—efforts truly make the city run.


One of the most imaginative, deeply engaging stories in the collection—one of the best I’ve read in some time, in fact—is the absolutely superb Perhaps—A Worthy Offering; atypical in terms of setting and atmosphere, it delves more deeply into spiritual and philosophical space, while offering delightfully sensuous entertainment as well.


“Some say Melinoe and Hecate are one and the same. Some say she was the daughter of Persephone and Zeus, the co-mingling of light and darkness. Still others say she is the darker aspect of the goddess Aphrodite. Which do you believe, boy? Do you hear the whispers and far-off screams of ghosts, or is it your own whispers and screams you hear?”


Mistress Susan, in a black and white gown that shimmered in the light of the torches on the walls, continued to caress Gregory’s smooth chest and prominent nipples with the flat of her blade.


“I like thinking of her as the dark side of love and beauty. Please what? I’m beginningto think you’re not paying attention.”


Gregory screamed as the blade pricked him under his left nipple. A small amount of blood began to flow.


“Oh honestly, don’t be such a baby.” She licked the blood from his chest, swirling her tongue around the nub of flesh, which continued to stiffen, and felt him shudder against both her mouth and his bonds.

This is truly great stuff! The author, who admits to suffering a great deal of self-doubt, shows the rest of us how it ought to be done. So far from “crap”, her personal demons, hang-ups, worries, and divers doubts are akin to the irritations that ultimately produce pearls. 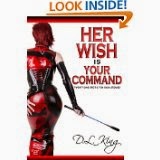 Posted by Terrance Aldon Shaw at 9:52 AM