It is thus something of an occasion to celebrate the appearance of this new collection of five short stories. Representing Brooke’s entire output in the form to date, Darkly Delicious Short Stories offers readers the rarest of gifts; sexy tales that they will actually want to read more than once. 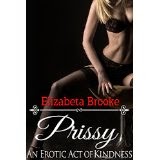 Wryly satirical on one level, funny, poignant and perceptive, Prissy: An Erotic Act of Kindness offers a sardonically delicious take on adolescent voyeurism, and the bewildering nature of “old sex” as seen through the eyes of relative inexperience. Prissy is a still-somewhat sheltered seventeen-year-old for whom thirty or—gods forbid!—forty seems unfathomably “old”. She is at once naïve and cynical, but it is a cynicism born more of ignorance and youthful absolute certainty than real-life experience. Will what she sees, hears, and learns broaden her horizons and open her mind, or leave her still more confused than before?  With its realistic and sensitive portrayal of adolescent emotion in the context of satiric fantasy, this may well be one of the most enjoyable stories I’ve read in a quite some time. 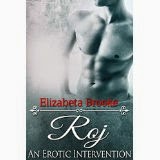 Brooke’s superbly affecting Roj, begins with the promise of a psycho-erotic masterpiece. Harried, constantly put-upon, thirtysomething housewife Lynne finds herself nearing the end of her rope, and contemplates the most extreme and final of escapes from a deeply unsatisfying existence. That is, until she is interrupted by a handsome young man, a school friend of her son’s, still almost a stranger to Lynne, a creature half-shrouded in mystery, the boy seems to possess everything her husband lacks; fire, passion, intelligence, and a terrifying beauty.


Lynne tried to smile at that but it was too hard. The weight of her sadness was a rock inside her chest that couldn’t be dislodged. She swallowed against it, trying to get some of her composure back. “It doesn’t matter, Roj,” she said, her voice husky and unfamiliar. Nothing mattered anymore.

“Yes it does,” he said, giving her shoulder a little squeeze.


His fingers felt big. Strong. She tried to remember the last time someone had consoled her. Couldn’t.


While the four newer stories in this collection do endeavor to reach a broader audience, their genre aspirations do not detract from their decided literary quality and substance. Though I may complain from time to time about the excesses of genre erotica, ultimately, the only unredeemable sin as far as I’m concerned is bad writing, a crime of which no one will ever honestly accuse Elizabeta Brooke. Her Darkly Delicious is enthusiastically recommended. 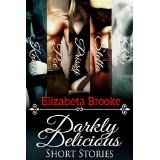