Review of "Drawn That Way" by Bronwyn Green

Pretty Tristan Weaver, a young guest worker from Wales, is employed as an accountant for an American  company that produces popular video games.  One day, her comment on an employee survey catches the boss’s attention:

Tris shrugged “ . . . It’s true. I haven’t seen a single female character come out of this company that wasn’t drawn like the average uni boy’s wank fantasy. Giant gravity-defying boobs, waists so small they couldn’t possibly hold up those chests and giant bubble arses—all I’m suggesting is a little diversity. A more realistic view of women in video games. I don’t think that’s too much to ask.”

Tris’ boss is Rory Brecken, a creative soul still somewhat bewildered by his own success, caught between his genuine artistic impulses and the stifling limitations of commerce. A man who “doesn’t do relationships”, his sexual needs have been met in a string of one-off affairs outside the office. Stung by Tris’ criticisms, he recruits her to model for a new game, which will feature more realistic female characters, authentic body types, and greater diversity.

Of course, one thing ultimately leads to another, all good intentions fly out the window, and these two begin a steamy office affair taking the form of a fairly conventional D/s relationship with a bit of light bondage thrown in for zest. Tris proves a willingly apt pupil, but—thankfully—never a pushover. Bondage-sex, as Rory points out, isn’t supposed to be easy, but Tris learns quickly that a certain level of disobedience is part of the game; it adds to the excitement and heightens the thrill of sexual tension, introducing an element of unpredictability and spontaneity, delectably surprising to both partners, the after-burn—the soreness left over from a corrective spanking—a fading memento of pleasure.

Green’s main characters are refreshingly ordinary and always relatably down-to-earth—a huge plus in a genre now so heavily overpopulated with impossibly-perfect dark-secret-burdened billionaires and airheaded cardboard cut-out Barbie-doll naïfs. On the minus side, I was somewhat disappointed by the way the author under-employs her interesting supporting cast, bringing them on stage only when it’s necessary for exposition or when she otherwise runs short of ideas for moving the story along and getting the main characters into place for the inevitable denouement.

At times the writing becomes overly repetitious. Regular consumers of standard romance seem to expect a level of dramatic irony in which the characters spend much of the story trying to sort out their feelings and overcome their self-doubt—though the outcome is obvious to the audience from the opening pages. If I have a serious complaint about Drawn That Way, it is that these characters spend far too much time rehashing the same emotions, pensively pacing back and forth over the same ground, walking their apprehensions like worried dog owners with a constipated pet. There needs to be some artful variation on this theme, and, one would hope, ultimately some subtle transformation of it; but here the expression of self-doubt feels like a cloying mantra, repeated with almost exactly the same words over and over. 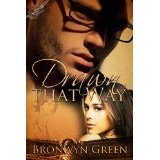 Posted by Terrance Aldon Shaw at 9:36 AM