Here is my critical take on two series that endeavor with varying degrees of success to combine elements of erotica with familiar genre forms; in this case, sci-fi/space opera, and historical fiction respectively

Korin I. Dushayl: The Lady and the Spyder series
Spyder’s Trouble
Spyder’s Truth

I have to admit, Korin I. Dushayl’s The Lady and the Spyder series has started to grow on me, notwithstanding some serious initial reservations. I have always been a sucker for space opera, ever since I saw my first episode of Gerry Anderson’s Fireball XL-5 one Saturday morning in the fall of 1962, a time when interest in space and space exploration was forefront in the collective consciousness, when the astronauts of Project Mercury were every true-blue young lad’s heroes, and the possibilities for adventure and discovery seemed limitless. Anderson’s marionettes made a deep impression on my wide-eyed four-year-old imagination, and I still had vivid memories of the show fifty years later when I purchased the complete series on DVD. Unfortunately, it’s true what people say about not being able to go home again. A kids’ series that was state-of-the-art for television in the early 1960s comes off as decidedly less magical in the early 2000s. Beyond the fact that Steve Zodiac and Venus’ strings are showing more obviously than ever (an “oops” mined for its full comic potential in Trey Parker and Matt Stone’s Team America: World Police, itself a brilliant send-up of Anderson’s technique and style), not to mention the horridly atavistic attitudes towards gender equality, the “science”, such as it was in that crudely embryonic attempt at science fiction, strikes us nowadays as unbelievably bad. To save the time and expense of putting his puppets into space suits, Anderson had the characters take “space pills” whenever they needed to go EVA (the first real space walk was still three years in the future), and there were aspects of physics and planetology that would have driven more skeptical viewers up the wall even back then.

But I digress—if only but a little. Dipping into Spyder’s Trouble, the first book in Dushayl’s series, I was rather disconcerted to discover that the strings were showing—qiote overtly as it turned out. The space-opera aspects of the story are blatantly derivative to a point where at times I thought I was reading Firefly fanfic—the only difference being that the fanfic characters cuss in Hindi instead of Mandarin. Then, too, some of the characters’ names are so poorly disguised as to make me wonder how anyone could steal with that degree of cheek and not believe they would be caught at it. (Captain Mal Reynolds becomes Varyl Malonds. Jayne Cobb becomes Bunk—as in “I’ll be in my bunk”,  while Serenity’s chief maintenance geek Kaylee is thinly veiled as Tamara, albeit now a lesbian submissive.) 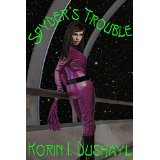 I might have simply stopped reading the aptly named Spyder’s Trouble—and, for a while, I was sorely tempted to abort the effort — but something kept me forging ahead. In melding decidedly well-worn space-opera tropes with elements of reasonably tame BDSM and—more interestingly— an exploration of issues surrounding religion, patriarchy, sexual repression and theocratic hypocrisy, Dushayl managed to hold my interest with increasing ease, especially in the second installment, Spyder’s Truth, which is written with a clearer vision and more acute technical assurance than the first book. Some of the “tech” aspects are actually pretty plausible (is there such a word as “near-fetched”?) and the author skillfully avoids the common pitfall of going too “tech heavy” at the expense of a genuinely human story.

And, at root, this is a deeply human story—albeit not a romantic one. The Lady whose collar all the crew—very much including the captain—eventually wear, is a fascinating character, alluring, persuasive, shrewd, deeply intelligent, but also at times tender, caring, empathetic and wise—precisely the qualities a great Domme should possess. Each character has a slightly different relationship with The Lady, a different, often interesting, history with her, and this lends a fair amount of variety to the narrative.  All fine and good. 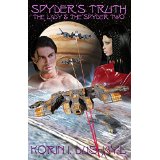 Lola Bruce-James
Lucilla and Her Slave
Lucilla in Rome

An attempt at erotic historical fiction, albeit neither particularly well researched or imaginatively executed. These two barely-chapter-length pot-boilers would have benefited considerably from the slightest bit of basic inquiry into the sexual culture of ancient Rome—that is, beyond a few re-runs of the Starz network’s Spartacus series, or soft-core Gladiator parodies on “Skin-emax”. It’s not as if such information isn’t readily available. Reay Tannahill’s Sex in History has been around for over thirty years now, and even a cursory glance at the first chapter of Melissa Mohr‘s Holy Shit: A Brief History of Swearing reveals a treasure trove of insight into the sexual attitudes, mores and taboos of the time. 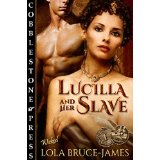 While the second book is marginally better than the first, in the end, author Lola Bruce-James employs ancient Rome as little more than a convenient one-dimensional backdrop for her little skit-like portrayals of half-baked anachronistic adolescent fuckery. Too bad that in her headlong rush to dress up a stroke book in the guise of “serious” historical respectability, she misses a huge opportunity to write something that could have been genuinely interesting and even reasonably original. 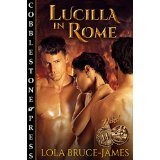 Posted by Terrance Aldon Shaw at 9:14 AM