This is an extraordinary book, one of those rare stories that seem, in retrospect, inevitable, as if it had always been part of our consciousness, only waiting for a gifted author to do it justice. In voice and style, Richard Raiment’s Islands is clearly inspired by the classic adventure narratives from the Age of Sail, everything from Defoe to Stevenson. But there is much more here than a simple, action-packed yarn of late-17th-century British mariners, tossed up together by fate upon a remote island, struggling to survive in an alien land against the caprice of the elements and the cruel whims of the sea, battling pirates and slavers—as well as their own deep-seeded prejudices—in order to claim their dignity as men. Islands is also a touching, m/m/f polyamorous romance, a powerful philosophical novel, as wide-ranging and wise as it is trenchant and acutely observed; stylish, exciting, thoughtful, probing, beautiful, moving, wonderful!

Islands is, above all, the story of an inner journey, and though introspection comes at times with a shiny aura of anachronism—the relative ease with which the narrator questions the consciousness of his time, the cultural conditioning, communal beliefs, mores and taboos of a rigidly-defined class society—his struggles are—or ought to be—timeless and universal; the search for who we really are, deep within ourselves, as sexual beings capable of love in whatever form that love might take, without anyone to tell us we must be one thing or another—or enforce their sadistic, ridiculously rigid notions of theocratic ‘natural law’ and propriety upon us.

What makes a fictional character interesting—what makes a character great in the end—is their capacity to grow and change within a set of limitations that place them in situations of intense conflict. Raiment has succeeded most admirably in creating a world almost perfectly suited for the incubation of interesting characters. Beyond the physical setting, a small island somewhere in the tropics off the coast of Africa, two castaways must learn to live and work together—must learn to learn from each other—and find a way to coexist when one of the sailors, Peter, is gay (a “molly” in the parlance of the day) while the other, Tom the narrator, is a rabidly reflexive homophobe. Inner and outer conflict is inevitable, especially when a young woman—an escaped slave—finds her way into their world. Ultimately the two men—islands unto themselves—must find a way to bridge their differences, for, as Donne so famously put it, “no man is an island”—nor can anyone pretend very long to be so if they would be fully human. (Raiment’s title is a stroke of descriptive genius on many levels!)

Here, Tom reflects on what he has learned about himself and the world:

You have seen it all, I told myself. You have seen the children begging, the babes cast dead upon the midden, the infants sold for a pint of gin. You have the whores who lack for nothing, pox included, from the service of ‘good gentlemen’. You have seen the starved and hopeless driven for want of a loaf of bread, scarred by the branding iron, deported into slavery. And this girl here, who plays you still so gently, who restores the warm infusion of your cock? What of her? A slave she was due to be. A Soul born in freedom, born to the sun and the jungle or the open plain, born to a family who loved her, a source of grandparents’ pride, beloved of mother, father, aunts, uncles, siblngs, coloured by the sun in order that she might not burn, and beautiful.

What happened to her? You know the story. Dirty men, white or olive skinned, too often black, too, in breeches or in Muslim robes, men who stink, unwashed, foul-breathed with pox, toothless with scurvy, to whom she is but produce, or a beast, an infidel, a kaffir—a ‘soulless’ one, a piece of merchandise; such men trapped her or bought her. They were armed with guns, with torches, whips; she was armed with nothing but her wits. And they stole her.

Raiment’s command of period idiom is without equal in modern historical fiction. His ability to make the older forms of language work so consistently to achieve his present literary objectives is awe-inspiring.  This is an author who has clearly done extensive research, and knows his subject matter in and out, but never bores readers with unnecessary detail, and never wields his superior knowledge like a bludgeon to patronize the less well-informed. There is a graciousness and a humility that shines through every page, imbuing the storytelling with a rich and rare humanity. 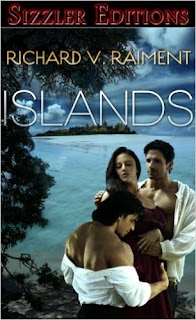 Posted by Terrance Aldon Shaw at 10:50 AM