An absolute delight! The thirteen f/f stories in this treasurable Sacchi Green-edited anthology are, without exception, nothing short of superb. One is impressed not only by the consistent high quality of the writing, but dazzled by the sheer breadth of imagination here on display, and, time and time again, utterly astonished by the very realistic depths of these engaging fantasy characters.

There’s more than enough variation in mood and style to avoid the sort of creeping disaffection one too often experiences with overly ambitious specialty collections. On the other hand, one detects a strong but sympathetic editorial hand quietly at work throughout, keeping everything taut and focused. (Readers do not encounter those glaring inaccuracies in language, careless apposition, or amateurish plot detours sometimes indulged by editors of a more laissez faire frame of mind.) Green has arranged the stories to achieve and maintain maximum interest.

If this collection can be said to have a unifying theme, it might best be summed up as “love overcomes all”. Curiosity gets the better of suspicion, understanding makes the heart grow fonder, the ice-melting fire of lust leads to an endless springtime of delight, the call of duty ultimately defers to the call of the blood, happily for now, if not always happily ever after. (I would not characterize any of these stories as ‘romance’ per se.)

In Cara Peterson’s Steel a deposed princess seeks the aid of a witch in order to slay a dragon and reclaim her throne, but finds that neither is possible until she can outgrow her own deep-seeded prejudices. Madeleine Shade’s Robber Girl is a fast-moving, action-packed shifter story with the author’s characteristic eye for interesting detail.  Salome Wilde’s The Princess’s Princess gives us a stylish f/f variation on the ‘spoiled princess’ meme, though in this case our princess learns a charming lesson about love and sex from an outsider, who, it turns out, is  every bit her equal. On the lighter side, readers are treated to Emily L. Byrne’s wonderfully whimsical Toads, Diamonds, and the Occasional Pearl, and the snarky banter of SWF Seeks FGM  by Allison Wonderland, which turns the story of Cinderella’s evil stepmother into a wickedly delicious romp with the Fairy Godmother, the language steeped in puns, alliteration, and sprung rhymes like some old-time late-night radio host channeling her inner beatnik.

Brey Willows’ Penthouse 31 is a clever contemporary updating of the Rapunzel legend, that does not eschew the scarier elements of the tale. H.N. Janzen’s The Prize of the Willow is a simple, beautiful, poignant tale of loneliness and longing overcome. In The Mark and the Caul, the always-interesting Anabeth Leung gives us a classic fairy tale of lovers overcoming their supposed ‘handicaps’, while A.D.R. Forte gives us a sweeping mythic “call of fate” story in Warrior’s Choice. Sacchi Green’s Norse-flavored Trollwise is marvelously constructed and perfectly satisfying with its sly wink of a surprise ending. Lea Daley’s wonderful The Sorceress of Solisterre combines cool palace intrigue with blazing sensual tension in the story of a politically astute princess and her young court seer and counselor.

Probably my favorite stories in the collection are Michael M. Jones’ scintillating, brilliant, lyrical Rumpelstiltskin redux The Miller’s Daughter, and M Birds’ powerful, memorably atmospheric Wood Witch. This exquisitely-crafted story draws on the archetype so familiar from legends like Mulan or folk songs like Sweet Polly Oliver and Bold William Taylor in which the young would-be warrior woman must don a man’s armor and pass as a soldier in order to fight for what she wants or believes in. Birds does not blink at the gruesome inhumanity of war, while gradually bringing the main characters into focus through the blood and smoke of battle. A truly stunning achievement…as is this anthology altogether! 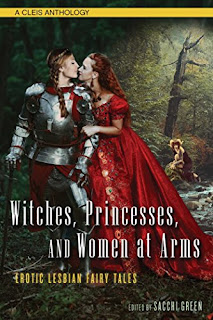 Posted by Terrance Aldon Shaw at 7:43 AM