OK, folks, this is the last time I'm going to plug this novel here or anywhere. If you have yet to purchase The Seven Seductions, this is your chance to get a copy of the final, fully-revised version abso-freakin'-lutely free, this weekend on Amazon from Thursday June 21 through Sunday June 24.

I generally refrain from tooting my own horn when it comes to my writing. In fact, I'm absolutely lousy at promotion, not because I don't think what I've written is worth promoting, but because I expend so much time and energy in creating my work, that I tend to be all tuckered out when I'm done. I HATE schmoozing or sucking up just to sell my wares, and I despise the idea of spamming my friends or whoring myself to strangers for the sake of a few lousy sales, hogging bandwidth with  endless self-congratulatory postings that don't move the reader-interest needle so much as a fraction of an inch one way or the other, while effectively making me look like a money-grubbing asshole.

What else can I do to tempt you? It's probably not cool (or even legal, let alone practical) to offer a free hum job with every download, or even a sensual foot massage--though I've been told I'm pretty good at the latter. Believe me, I'd happily do that without the slightest promise of anything in return. So, think of  your free copy of The Seven Seductions as a super-sensual foot massage, except it's for your brain. Goodness knows, we could all use a nice brain massage from time to time; after all, the 'big brain' is the largest, most complex sex organ in the human body, and it requires its share of attention. You can also make your brain happy by indulging it with finely-crafted, sexily stylish language of the type to be found in The Seven Seductions, totally free this weekend on Amazon, Thursday June 21 through Sunday June 24...

Still not convinced? Do I need to write one of those sneaky fake reviews like the ones so many unethical authors put up on Goodreads, or pay to have posted on the Zon? How would I go about it?

Haunted by a demon's prophecy, Nebraska farm girl Gretchen Ausslander grows up dreading the destiny she cannot escape—not even within the walls of a convent—the lustful longings of the otherworldly creature she knows only as The Nameless One.

Uncanny things have always had a way of happening ever since her older sister read aloud from a book of black magic, unwittingly awakening the demon. But now, after having become Sister Mary Chastity, Gretchen must struggle with the stirrings of her own long-buried desires, the undeniable yearnings that overpower her flesh, and the guilt that inevitably follows when memory intrudes upon the present and dark secrets come back to confound her.

On “holy retreat” in a vacation house by the shores of a lake in the Great North Woods, Mary Chastity meets Magic, a handsome, carefree young artist who tests her vows even as he speaks to something deep within her heart. Can this beautiful boy help her to face her fears—or is he part of the future The Nameless One has foreseen for her all along? Is Magic the key to Mary Chastity’s salvation—or nothing less than the incubus itself in human guise?

Still stubbornly unconvinced?? I guess the only card I have left to play is the writing itself. Here's an excerpt from The Seven Seductions, which--surprise!--you can download for free this weekend on Amazon, Thursday June 21 through Sunday June 24...

[UPDATE 6/25/18: The promotion was a success as far as I'm concerned. About 45 copies were downloaded. This may not seem like many, but if most of those downloads come from people who are genuinely interested in reading the novel--as opposed to thousands of casual downloaders with no real interest beyond collecting yet another free book--this can only be to the good.] 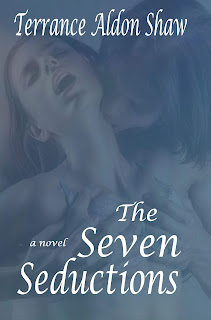