NOTE: Parts 1 and 3 of The Fire Hostage first appeared on author and fairy-tale maven extraordinaire  Madeleine Shade's website in early 2015. Madeleine had invited me to write something for her, and I was more than delighted to accept her invitation, though with a limit of 4000 words my ambition far outstripped my word count, and I had to leave the middle part of the tale untold, at least for that time being. I finally  completed Part 2 earlier this year (February, 2018) bringing the total ending word count to 7,463,

In celebration of my 60th birthday on August 9, 2018, I offer the story, complete for the first time, in three installments. I've included a few of Arthur Rackham's classic color illustrations for Wagner's Ring cycle, as The Fire Hostage is closely based on Siegfried, the third opera in the cycle.

You can read Part 2 here and Part 3 here 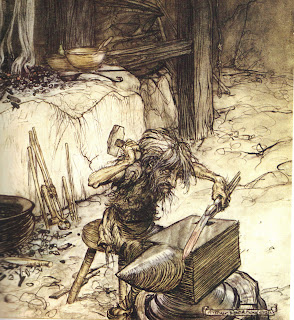 Melt! Melt! Flow together like a river and be one
Where there were many and yet none!
May Loge, the fire-god’s will be done!”

No sooner had Findlekind uttered the words than his prayer was answered, for there came a great gust of wind, and a column of brilliant viridescent flame fell from the sky with a yawning roar. The unearthly green-gold fire danced upon the crimson coals with a sound now like the tinkling of tiny bells or again the mischievous laughter of a child. Yet the green fire did not overwhelm the red, but only made the forge burn hotter until the metal was soft enough again to work.
Findlekind wasted no time, but laid the glowing blade upon the anvil and struck home, folding and refolding the metal three times by three times, and hammering three times again, until the sword had been turned no fewer than seven and twenty times in all, a number most pleasing to the gods.
“‘Tis done!” he cried, lofting the weapon in haughty salute to the glory of youth, which knows nothing of the impossible. “Now, to try it!” Findlekind twirled the sword about, tossing the hilt from hand to hand in order to test its balance. Then, grasping it firmly, he brought it down edge-on against the fulciment itself. A single blow was all it took to cleave the anvil clean in twain.
“Ha! At last” The dwarf hopped up and down, grabbing greedily for the hilt. “’Tis mine at last!”
“Have a care, little man,” said Findlekind, knocking the dwarf into the dirt, “lest I be of a mind to sunder your miserable carcass as well, for I know now who I am!”
“It cannot be!” cried Zwergrotz with a piteous squeak. “Surely, you cannot be—”
“Aye!” said Garin, for this truly was his name, “I am the son of Lotharing and Lorne! T’was my mother you found in the forest, and this very sword you stole from her dying hands. T’was to her you gave your worthless word, turning away before the warmth had even left her to sell me to the ghoul, and wash your cursed hands of mother and child, all in a single craven stroke. I should slay you here and now for what you’ve done!”
“Mercy!” The hapless creature cowered upon the ground. “Have pity on poor Zvergrotz! I’ll share my treasure with ye, young hero! Did I not promise to divide it so? Only aid me in retrieving it, and I shall be as good as my word.”
“What good was your word to my mother?” Garin towered menacingly above the dwarf. “I shall have my revenge upon you, feckless worm, of that you may be sure. Yet, perhaps I owe you some little grace for telling me of my beginnings. And if there’s treasure to be had, well, you’ll lead me to it and soon, for a wealthy man can slay a traitor on the morrow as easily as a poor man make short work of a cowardly wretch today.”
“I will! I will!” The dwarf groveled at the young man’s feet, crawling forward to kiss his boots. “Zvergrotz will keep his word this time! He promises!”
“Up now!” Garin prodded the loathsome supplicant with the tip of the sword. “Make haste, for I’m impatient to be done with you.”