The Music in a Writer's Mind


Emmanuelle de Maupassant: Are there particular pieces, or musical styles, that stir you deeply, transporting you to an alternative (or enhanced) awareness of yourself?  Are you aware of particular musical pieces/songs/singers having influenced your writing directly?

TAS: I worked as a musician for much of my adult life, eking out a modest living as a singer and a classical composer. I was published (under my ‘other’ name) and had my work performed all over from New York to San Francisco and LA—and if I were to sit down and figure out my average income for those thirty years, I probably couldn’t have afforded a cup of coffee once a week.

But, yeah, of all the things that have influenced me as a writer, none is more deeply personal—intimate and elemental—or so essential a part of myself as music, and, particularly, classical music. (Don’t get the wrong idea, though; I’m not some sort of snobby elitist with a rod stuck up my pretentious ass. I like all kinds of music, from 70s prog rock to world folk, bluegrass and country (one of my short stories, Saturday Nights in the Middle of Nowhere features an aspiring country-western chanteuse) to grand opera, avant garde classical-influenced jazz, hip hop and rap.)   I’ve composed chamber music and symphonies, written sonnets and  poems in English and Hebrew that I’ve set to my own music, as well as not-very-good lyrics for country songs. I can say without hesitation that editing a symphony is a lot easier and far less time-consuming than editing a 70,000 word novel!

But, to get back to the point: there is nothing that equals the power of  music to express emotion, to evoke atmosphere, and establish mood. (This is why a film without a score often seems to fall short of its potential, lacking the full measure of visceral impact—just compare the scene in Jaws where the shark attacks the boat, first without John Williams’ music in the background, then with it. You’ll see precisely what I’m talking about.) Whether conjuring a sense of existential anxiety and dramatic tension, desolation or euphoria, claustrophobic horror or the sublime vastness of space, nothing comes close to music.

In talking about the way music has influenced my writing, here’s the thing: when you’re composing a symphony or an intimate piece of chamber music, you have to think multi-dimensionally; you have to conceive spatially and temporally as well as tonally, and you have to be able intuitively to discern structure. Plus, there are rules about spelling and grammar and syntax in music just as there are in prose. Melody, harmony, and rhythm all have to be coordinated to form a coherent statement. You can’t be a great composer if you only grasp what’s on the surface—even though that’s the only thing most listeners will ever hear. You have to appreciate the inner workings, the way these disparate elements all come together. You have to see it all from the inside.

Now, consider the added challenges of setting a text to music. You have to be mindful of the natural stresses of the language you’re setting—the way spoken phrases don’t always adhere to a single, regular meter (as so tortuously forced to do in far too many pop songs). You have to recognize the particular word or words that need to be given extra weight in order to communicate the poet’s rhetorical intent. The 20th century English composer Benjamin Britten was probably the most gifted  and fluent ‘text-setter’ who ever lived—and he was one of the composers who most strongly influenced me as a composer, and continues to inspire me as a writer. My little m/m story A Lovely Boy from The Moon-Haunted Heart was inspired by Britten’s setting of Coleridge’s Lines on a Child which appears in Britten’s song cycle, Nocturne Op. 60. I’d also have to cite Britten’s earlier song cycle Serenade for Tenor, Horn and Strings Op. 31 as a work of art that truly changed my life—his settings of Keats, Blake, and Tennyson are truly magical!

Great music has a sense of flow, an inevitable logic, leaving the impression in the end that every constituent element in a score is perfectly coordinated with every other element. I can think of a lot of possible examples here, but what comes most immediately to mind are the great operas of Wagner, particularly Die Walküre and Siegfried from Der Ring des Niebelungen in which the music never seems to pause even once to catch its breath. I want that quality of sensuousness—that inevitable sense of flow—to permeate my prose and animate my storytelling.

Always—always!—whenever I sit down to write a story, I consider the musical quality of the words, the prose-melodies that are created by the artful combination of words and phrases gradually built up into the literary equivalent of a symphony (that word, by the way, means ‘sounding together’). The way the writing sounds when read aloud is important; if it doesn’t flow, if it doesn’t reach out and tickle the reader’s ear—if it doesn’t make music—it’s not ready to publish.

And how do you make music with words? A couple quick points. First, vary the length of your phrases, aiming for an artful asymmetry (like Mozart in his music). Never let your rhythms become too regular or predictable. Avoid falling into the same repeated syntactical patterns (it’s hard not to, but that’s what re-writes are for). Understand that each word (or each note) carries its own innate energy, like a charged particle. Each word has its own weight or mass that gives it more or less rhetorical value depending on syntax. If you arrange words carelessly, putting similar words too close together (apposition) you can end up draining them of their emotive power.

Finally—and this is quite important, I think—don’t always play your music in the same key. Great music and great writing is enhanced by modulation. So, if one were to attend a concert or listen to a record where every piece on the program is in, say, C major, eventually the listeners’ minds will tire of C major and stop paying attention. In writing, what this means is, vary the mood and pace from time to time—especially in multi-chaptered works—occasionally, dark clouds need to roll in and, sometimes, the sun needs to break through the dark clouds, if only long enough to keep the reader interested.

I am a relatively slow-working writer. Sometimes I am in awe of those writers who can churn out veritable reams of fiction in a relatively short time. But—one final analogy from the world of classical music—there are two basic types of creative: there are the Mozarts for whom it all seems to come easily and fast, and there are the Beethovens who must struggle, sometimes for years, to achieve their equally-great ends. There’s nothing wrong with either approach, and—unless one has deadlines to meet—there really is nothing preferable about one or the other. I’d also point out that being a slow writer is in no way the same thing as being a procrastinator—I get so tired of people who try to turn procrastination into a virtue!!!—nor is being a fast-producer the same as being careless or slap-dash. We all want to achieve the same goals, some of us simply take the scenic route.

There's one more thing I'd like to mention apropos my writing. After college, I got into a Master's program in musicology (and, before you ask, yes the way musicologists are portrayed in Peter Bogdanovich's brilliant neo-screwball comedy What's Up Doc? is right on the money!) While I didn't go on to complete the Master's degree (maybe I just wasn't weird enough to fit in), I did take away some extremely valuable lessons, which have benefited me as a writer of fiction; most importantly, the technique of describing music in prose. If you can write about a piece of music with a reasonable level of technical accuracy but do so artfully, in a way that is elegant, engaging, and, ultimately, inspiring, you can pretty much do anything in prose!  So, here, to end, is an excerpt from my short story Viaticum from The Moon-Haunted Heart:

I ask you to change the record. The melancholy of this music is more than I can bear. Finzi has always tugged at my heart, evoking the sublime agony of a soul that pines to soar, though still not wholly willing to depart. It no longer seems real to me—not in this hour of truth—a poignant irony that strikes too close to the spirit. I fear I shall heed its call at last, though I cling to you and to this moment with all my fading strength.
“Find the Berg concerto,” I whisper.
“Subtitled to the memory of an angel,” you read casually from the liner notes.
“He wrote it as a requiem for... I can’t remember now...”
“Manon Gropius?”
“Alma Mahler’s daughter with Walter Gropius—”
“The famous architect.”
“Yes. She died of polio when she was only 18.”
“How do you remember that?”
“Listen.”
The music is at once a bitter cry of anguish and a soothing lullaby, a rhapsody of shifting shadows, terror and grief, daunting dissonance and ineffable sweetness, a journey through the wilderness of ‘why.’ We seem to stumble half-blind through this arid landscape, the sound of the violin our only guide, going before us like an aspiring spirit glowing in the gloom. Somewhere, at last, from out of the middle distance, muted as if from behind a veil, we hear the consonant strains of a Bach chorale, Es ist genug—it is enough—intoned by a choir of solemn woodwinds, wistful and mysterious.
‘Do you hear that?’ the violin seems to inquire, ‘It is enough. It is... enough. Perhaps... it is... enough... Yet see? The bitter pall has parted. The setting sun bursts through.’ 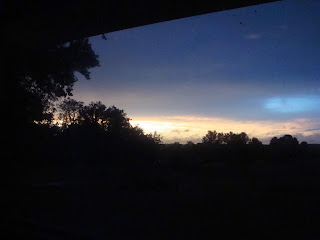