“Japan was a perfect place for a cowardly Western rebel,” Storey’s narrator, Lydia, tells us, “You could break a dozen rules of etiquette in a day and get that bad-boy frisson without anyone really giving a damn, because the Japanese were expecting you to get it wrong anyway.”


And Storey knows what she’s writing about, having spent some years living and working in Japan.  Now, she has given her readers a decidedly magnificent piece of fiction in which the authenticity of experience shines through, lifting Amorous Woman far above so many of those blandly “colorful” international romance stories with their cookie-cutter characters going through the same universal motions against some sketchily researched, vaguely imagined “exotic” background.


And so I told him how living in Japan will give him a leisure no mere tourist has to know the rhythms of the place, a land of tiny poems. In autumn he’d see the persimmons glowing like huge, orange jewels on their bare branches, then winter’s dusting of snow on blue tile roofs. He’d learn why the old erotic pictures are called ‘spring prints’—because in that season the air is as soft as a lover’s whisper—and he’d sigh at the perfect coolness of iced barley tea slipping down his throat on a wilting summer afternoon. As the years passed, he would become part of it. The neighbors would stop staring and start to nod a greeting, and one day the tiny old lady in the gray kimono at the snack stand would wrap up his regular order of red-beaned-rice-balls before a word was spoken, and she’d flash him that first gold-toothed smile, and he’d be happy all day. It’s like someone’s given you a whole other life, I told him, an extra life to live for a while.


In this case, blonde, blue-eyed gaijin, Lydia is the exotic element of the story. Not exactly an innocent abroad, and certainly not an innocent broad; intellectually curious, sexually voracious, always craving new experience, she comes to Japan as an instructor of English conversation, her clientele mostly business and professional men. There is a certain irony in being employed to teach the niceties of Western etiquette in a society so richly—some might say severely—steeped in ritual; layer upon layer of prescribed complexity, which few outsiders ever manage to penetrate. And, especially where sex is concerned, the American faces a bewildering set of seemingly contradictory taboos and proscriptions that make the simple black-and-white dualism of the West seem positively laid-back.  Through Lydia, we explore this “floating world”, a kind of erotic parallel universe, “the neon-lit world of dreams and desire”.


If I have any complaints, it may be that Amorous Woman is somewhat over-long. There is, perhaps, too much time spent on Lydia’s erotic coming-of-age at home in the States, which is not wholly essential as backstory. This is a common pitfall of memoir form, in which there is often a nagging personal temptation to include “everything”.  But for all that is intriguing and inspired here, everything is not equally interesting, and the pacing might well have benefitted from a few strategic cuts. Still, this is in no way to denigrate what is in its totality a superb literary-erotic achievement.


Originally published in 2007, and only recently released in e-book form, Amorous Woman is enthusiastically recommended in either format. 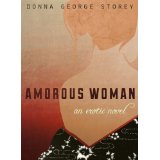 Posted by Terrance Aldon Shaw at 8:26 AM