Everybody wants to be a famous writer these days, but nobody wants to read. A shocking number of self-proclaimed authors seem to believe that reading anything other than their own “brilliant” stuff will somehow ruin them, sap them of their Wile-E.-Coyote-Super-Genius-like inspiration, and snuff out their personal eternal flame of autoerotic originality. And what’s the result of this belief? A lot of sloppy, rambling, self-indulgent, same-old-rooky-mistake-infected amateur dreck, often little more than a weak echo of the one or two books these morons actually did bother to read once upon a time. I slog through more of these dilettante scribblings than I care to think about every month in the process of vetting books for review on this site, and I can only say that I have come to understand why so many of my English instructors in high school and college were in such a perpetually sour mood. (Of course, some of them were simply being their normal asshole selves, but most of them, I now see, had a pretty good excuse.)


And it’s not only would-be authors who don’t want to read; there’s a whole world of self-deluded wannabe singer/song-writers, actors, composers, painters and performance artists, all clamoring for attention; a nation of narcissists, scheming to copyright themselves, dreaming of being discovered without actually having to do any hard work, ultimately transcending themselves as their own brand. (One starry-eyed dreamer who contacted me recently, with but a single self-published title to her credit, is already inviting potential readers to write fanfic—talk about the triumph of self-delusion over reality, not to mention carts before horses!) People seem enthralled by this notion that what they have to say is uniquely interesting or irresistibly compelling, and if they can only find the right forum or platform for their self-expression; if they can only market themselves a bit more aggressively; if they can only snag one more review from the “right” venue, then the world will simply have to recognize their specialness and reward them with fame, adulation, and untold riches. A few wild tales of “overnight success”; a handful of fluke “discoveries”; rumors of so-and-so’s latest fat advance, and the gold rush is on. Never mind that those old media paradigms are now hopelessly obsolete. Self-expression and self-indulgence are becoming one and the same. Professional creative endeavor is doomed. And there’s a reason those riches are “untold”; for the most part, they don’t exist.


Alright, perhaps I’m being overly pessimistic—and please, shoot me if I ever turn into the old guy yelling at the rotten kids to get off his lawn—but the question remains; what does an aspiring author have to do to be heard in this increasingly noisy world of ours? Beyond that; what does a writer need to do in order to be taken seriously?  The simple answer is; to be heard, one must have a voice. A writer’s voice does not necessarily need to be unique, or striking or even particularly original; but, for a start, it must be strong, clear, and well-focused. A writer’s voice is not an innate gift; it is something that must be trained up; cultivated, nurtured, exercised, polished; honed. To train the voice, a writer must do two things with unfailing diligence; write constantly, and read voraciously.  Constant writing is like weight lifting to build up muscle mass; the regular habit of writing builds up the brain and keeps it strong, while reading provides the fuel it needs to flourish.


No one is born a writer; writing is learned, and no writer—no artist—ever steps out into the world fully formed. Working through early influences is part of the artistic growth process. There is nothing wrong or unnatural about being influenced. Rather than resisting influences, a young writer should turn and face them head on (preferably without trying to publish the early results). There is no piece of writing from which one may not learn. So far from stifling one’s originality, good books offer models of what works; bad books—and there are many—show us what not to do. When a writer attains maturity, if not mastery, she will look back on her early influences and understand the difference between the good books and the bad ones, recognizing the lessons learned from both. The fact is, if reading other people’s books had the power to snuff out one’s precious creative spark, there wasn’t much of a spark to begin with.  In truth, the more one reads the less enthralled by any single influence one is likely to be, and the more original one becomes.  But the need to read doesn’t end with the attainment of mastery; it is a lifetime pursuit, and part of the ongoing job. Ultimately, the more broadly one reads, the deeper one thinks, the better one writes, and this process of literary symbiosis is never-ending.


And how to be taken seriously? What I look for when vetting books for review is, first, that strong, clear, fluent voice; confidence, competence, a solid command of language, and an engaging style.  Beyond that, I want well-drawn, well-defined, smart, memorable characters undergoing a process of growth or change; compelling conflict, a story that piques my interest without being overly derivative or gratuitously far-fetched; a narrative that continually moves forward. I want maturity—but not in the euphemistic Triple-X sense of the word—a thoughtful, entertaining exploration of grownup themes. Is this asking too much?


Lock Me Up and Set Me Free by Liberty St. James


I like to move out of my slap-dash, hand to mouth existence, and play at being pampered. Sitting at the top table in the restaurant of the moment, drinking champagne and flirting. Lying like the Rokeby Venus on some chaise lounge in a flat looking over London, naked except for real pearls or a silk scarf round my waist, while a man sits fully clothed in the chair opposite, watching me touch myself while he smokes. There’s something about that much quiet luxury; something that’s almost melancholy, like being indoors in winter while rain batters the window.”


Granted, we could do with fewer exchanges like this:


I love music as much—more than—I love sex. I want to drown in it; lose myself in it. Falling into music makes me feel safe, as if someone is holding me up. While I listened, I decided to let myself fall into this weekend the same way and not resist. Total submission. I’ve flirted with it before but never properly given myself to it


At an appropriate point I do a slow strip to You Made Me Love You. The dress, hat, and gloves come off. Underneath I’m in a corset, frilly pants and stockings. I sing I Want to Be Loved By You with brunette sleaze rather than blonde Marilyn Monroe dizziness. Then I get the cello out and play the prelude from Bach’s Cello Suite Number 1. You know the one, that famous one; the only cello tune you’ve ever heard on the radio or as the backing to an advert. I play it in my corset and stockings. I play it as if it’s turning me on like no-one I’ve ever known; I play it like I’m fucking the music. I am fucking the music. It does turn me on like no-one I’ve ever known. If I died playing the cello, I’d die happy.


Liberty St. James is a writer with enormous potential, and a newcomer to watch. In spite of its subtle flaws, overdone sex scenes, and a male lead whose demons are just a bit too predictable to be compelling, Lock Me Up and Set Me Free is nonetheless an impressive first effort and recommended to those in search of something new.

The Mercy of Strange Men by Aimee Nichols


This collection of well-crafted short stories from Australian author, Aimee Nichols is something of a mixed bag. There is sufficient contrast in mood and voice to keep things interesting, but it’s clear the author was more invested in some fantasies than others. She is at her best when her passions shine through; but has some difficulty disguising her distaste—occasionally approaching contempt—for some of her more conventional scenarios. The most interesting stories take us into steamy urban undergrounds, indie rock dives, kinky sex clubs, and seedy apartment back-bedrooms, as in The Gospel of Sophie, a genuinely first-rate ménage narrative, or the gloriously passionate lesbian encounters of Lipstick and Strap On Sex is So Passé. Nichols conveys considerably less enthusiasm when inhabiting the heads of serendipitous voyeurs (The Window and Down in the Park), and the overly-stylized psychological monodrama of the title story leaves the reader with a bewildering sense of literary déjà vu, bringing nothing new or positively exciting to the standard BDSM scenario. Far more successful is the exceptionally well-thought-out All Eyes On Him, written from the perceptively mature reference of an experienced fem-dom:


This is the story we are used to. Women, and especially attractive young women, are meant to be attracted to power. We’re meant to be the reason why men who make no effort to please anyone but themselves bemoan their lack of ability to get the women they feel they deserve. We’re supposed to accept status and money in exchange for being dominated. Some of us know that’s not the only narrative . . . Topping helps me find equilibrium, brings a dynamic to a relationship that allows me to relax into things. I like to know where I stand with the person I’m fucking or playing with, and I like them to know where I stand, which sexually speaking is over them, and usually holding something used to inflict pain. 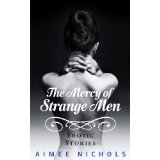 Posted by Terrance Aldon Shaw at 10:54 AM