At one point, early on in P.M. White’s Volksie, anti-hero Alston, along with his best friend Grumbine, and Volksie, Alston’s soul mate-as-yet-unawares, plunge their stolen VW Beetle into the Mississippi River near the Gateway Arch in St. Louis. The little car begins to sink, and for a terrifying moment, Alston fears he’s lost the girl of his dreams, not ten minutes after meeting her. But before the chapter skids up to a brake-squealing, metal-crunching, edge-of-the-precipice to-be-continued , Alston believes he sees Volksie emerging, naked, on the opposite bank. Never mind that the river is nearly a mile wide at this point, and rife with treacherous currents; this girl is magic!


And so it is with much of this story. Subtitled “A tale of sex, Americana, and cars”, Volksie is P.M. White’s vividly dreamed, cute, seductively satirical, sometimes silly magical homage to the wide, fast-flowing river of the American mythos and the tributary subcultures that feed and renew it. The book is a classic chase epic; a tale of sadistic gangsters pursuing hapless heroes across the wide open deserts of the American southwest; think Vanishing Point with VWs; classic American car culture turned on its head; a gentler, geekier Dirty Mary, Crazy Larry with cybersex, less impressive horsepower, and a much happier ending.  It is a story about survival and revenge, enthusiasm, passion, obsession, and loving what you love no matter what the world may think.


Where style was concerned, the VW Type 1 (Beetle or bug) was a living fossil long before it ceased production in the early 2000s; a charming throwback to the late 1930s, when “streamlining” was all the rage in automotive design. There is a certain female-ness, a Reubenesque voluptuousness to the profile of these cars with their sloping, fat-fendered curves; a look that can be seductive—even erogenous—to those sufficiently receptive. Truck, one of Alston’s shadier acquaintances, even goes so far as to gratify himself with a Beetle in a surprisingly creative—if not crudely obvious—fashion. This is, in its way, a metaphor for enthusiasm taken to extremes; the very essence of what it is to be a nerd.


In fact, I do not believe it would be unfair or in any way unduly dismissive to say that Volksie is the ultimate nerd fantasy. The story would not have had quite the same quirky charm if White’s characters had indulged a more conventionally macho passion for, say, classic Mustangs, Corvettes, or ‘70s-era muscle cars. VW-fandom may be no less unselfconsciously intense; no less unapologetically enthusiastic or—dare one say it?—hardcore; but park a 1966 VW 1300 Beetle with its tiny, rear-mounted, air-cooled four-cylinder engine next to any contemporary American performance car, and one is defied not to smile—or laugh out loud—at the juxtaposition. (Volkswagen’s advertising in the ‘60s was famous for playing up the car’s underdog-ish ordinariness in extremely funny and highly effective ways.) Whether intentional or not, there is a similarly subtle vein of parody running through White’s narrative, the sort of sly referential gestures that film geeks and car buffs (like myself!) absolutely love, as when Volksie convinces Alston to tie her to the roof of another stolen Beetle, for a round of “ship’s mast” a la Zoe Bell riding the hood of a ’70 Dodge Challenger in Quentin Tarantino’s Death Proof:


Volksie dropped her floral skirt to the asphalt and left it where it lay. She wore no panties beneath it. Alston admired the way the sun played along her long, thin legs as she unbuttoned her blouse. She dropped it to the ground next to her skirt, and stood fully nude on the deserted airport runway. Without saying a word, she climbed onto the hood. The seductive globes of her milky ass thrust toward the hot sun like a carnal offering. Volksie mounted the bug slowly and carefully. Her breasts swayed like firm, fleshy pendulums. Once on the rounded roof, she turned and spread her legs wide, then leaned back on her elbows, waiting to be tied. Her nipples looked hard enough to cut glass.


Alston grabbed her ankles and pulled her forward. Her ass squeaked on the metal roof. With her legs spread across the windshield and pointed toward the front fender, he set to work on the bindings. Within minutes, he had her ankles tied tightly to the metal fender. He popped out the small side windows and looped the rope through it, then bound her wrists. Throughout the process, Volksie lay silently on the roof, her eyes closed and her chest rising and falling with excitement.


Sounds like fun! No character in this story, infused as it is with the kind of magical, dream-like atmosphere, is more magical or enchanting than the title character herself. Volksie is quirky, eccentric, sensual, impulsive, and just the right kind of crazy. We fall in love with her, precisely as Alston does, because she’s the girl who loves the outsider--not necessarily the bad boy--the babe who ought to be out of our league but doesn’t play hard to get; knows what we need before we know it, and never fails to satisfy in the sack; the down to earth demi-goddess who’s easy to talk to, and wants to be with us in spite of our inexperience and insecurity. Wow! Does she have a sister?


[*] I do have a few nerdish nit-picks about certain details in the text. First, there’s no such thing as a “’65 Super Beetle”. The Super Beetle, with MacPhearson struts and elongated front end, did not appear until 1971. Second; when White talks about a customized VW, built to resemble a stretch limo he writes “opposite facing doors, as well as the standard ones lay open for public viewing.” Surely, if one is writing from the viewpoint of American car enthusiasts, one would know the term “suicide doors”. Finally, in referring to a VW Thing, we get this: “The Thing, which turned out to be a 1944 model, the precursor to the German sales model.” The VW Type 181 “The Thing” was a product of the late 1960s, and not quite the same animal as the Type 82 Kubelwagen, the jeep-like VWs used by the German army during World War II. (Honestly, people; you can look this stuff up!) There are certain “British-isms” lurking in the background of the American setting; the character’s names, for example, don’t ring true;  especially the gangsters, who seem to have stepped out of one of Guy Ritchie’s dark-underbelly-of-London crime dramedies (of which I am a huge fan, by the way).


I don’t think any of these misplaced details represent a fatal flaw, however. Once readers start rolling with the story, which accelerates with a stylish momentum, such minor niceties will hardly matter. Volksie is a fast, fun and refreshingly wild ride, not to be missed. (Oh! And by the way: I WANT a reproduction of the cover done up as a large-size glossy poster! Genuinely beautiful!)


[*] Subsequent to the posting of this review, the author and publisher took my "nerdish nit-picks" into consideration and have accordingly revised the text, both in the e-book and forthcoming print editions.  It's gratifying to know that my plodding pedantry is good for something! TAS] 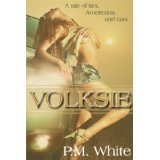