Review of "Adultery: The Scarlet Alphabet" by Rod Kierkegaard

Rod Kierkegard’s Adultery: The Scarlet Alphabet is a comic gem, a cerebral masterpiece of contemporary social satire slumming as breezy sex farce, with a bit of trenchant literary criticism thrown in for good measure. The author’s razor-like wit is stropped with just the right amount of cynicism, which he employs not so much to lay bare the paradox and folly of modern life as to gleefully vivisect the whole animal, pulling back layers of pretense and self-deception like tissue to reveal the fragile, frightened egoist’s heart beneath—all the while managing to be funny as hell for more than 300 pages.


Orlando Plummer is a tenuously tenured professor of Traditional English Literature at upper-Manhattan’s ultra-PC Lumumba University (three guesses as to what that reference oh-so thinly veils). A self-described academic “performance artist” with the veneer of an Oxbridge pedigree and not a single creative or ambitious cell in his body, Orlando is the ultimate pretender, the archetypal outsider, ever fearful of being found out, yet still somehow content to coast (and/or screw) his way through life in a miasma of alcohol-dazed indifference, leaving his long-suffering Chinese TA to actually do most of his work, and almost every major life-decision to the wife he loathes but cannot leave.


Don’t draw the wrong conclusion. Don’t think for a minute that I don’t love my wife. Love is far too mild a term for my feelings. I loathe my wife. I hate her guts. Worse, I dislike her company. She is a crashing Seven-Sisters educated—which is to say woefully uneducated and willfully ignorant—bore. She is, however, always right about everything, particularly money, the sea of green that is her birthright, her native element, the source of her elemental power.  I despise my wife. I also desire her. And I’m attached to her. Most of all I fear her. She is an object of horrid fascination to me, a fetish object. Her real name is not Valeria Messalina, of course; I have changed the names of everyone who will appear in these pages except for one.


Orlando is virtually egotistical in his passivity, constantly surprised and bewildered by his own feelings—so much so that the very awareness of complex emotion seems to arrive unbidden, catching him off-guard every time.


He is, as he himself puts it, a man without a heart, incapable of feeling guilt, only fear. And there is much to be afraid of in this labyrinth of Orwellian academic bureaucracy where PC culture has run not merely amok, but deep into the province of the surreal, where New Age psychobabble and deconstructionist gobbledygook have assumed the solemnity of cultic scripture, and where a career-ending sexual harassment complaint is only a direct look in the eye away.


In the early 90s when I first escaped north London for the University of East Anglia, there was a song then very popular on Radio 1 and in the dorms, Enigma’s “Principles of Lust.” In Val’s honor, the song should have been renamed “The Rules and Regulations of Lust.” However, in fairness to my wife, most swappers—excuse me, members of the Consensual Adult Community—are invariably very big on regulating lust; apportioning it, doling it out like dessert or a child’s allowance, establishing rules and “boundaries.” They are very principled people. That is one of the many ways in which they resemble university administrators.


Accordingly, in response to Orlando’s obsessive philandering, Val arranges a series of “couples dates” with the wealthy Roger and Arabia Fliederman


Befriending another married couple is almost always a mistake. Hence, the relative safety of casual, consensual, or in our case, Val’s and mine, stage-managed adultery. One avoids all the usual pitfalls of “couples-dating” by going straight to bed, thus achieving the boredom and monotony of the physical intimacy of marriage at a single bound. You may call this swinging, wife-swapping, or polyamory if you like. I prefer to call it adultery.


References to Japanese No and Kabuki theater are a sort of recurring literary symbol in the novel, a principle of continuity that effectively holds the structure up despite its sprawling eclecticism. Other marvelously arcane references abound, everything from the Tale of Genji to the Orlandos of Ariosto and Virginia Wolf, the novels of Thackeray and the short stories of Irwin Shaw. (Kierkegaard is no doubt aware of his famous namesake’s Diary of a Seducer, though this seems to be the only obscure literary reference not included in the novel!)


Then too, much of Adultery with its hyper-intelligent, highest-common-denominator humor put me in mind of what is probably my favorite novel of all time, Josef Skvoreky’s vast, darkly comic 1977 grand opus, The Engineer of Human Souls. Both Skvoreky’s political émigré college professor Daniel, and Kierkegaard’s stranger-in-a-strange-land Orlando share the same wry, vaguely bemused contempt for their students, a bunch of bored, lazy, shallow, over-privileged, hyper-entitled plagiarists, whom they nonetheless have no qualms seducing.  Skvoreky’s novel is cleverly structured like the syllabus of the course on American literature Daniel teaches at Edenvale College, the small, vividly imagined Canadian liberal arts institution set in a mythic wilderness, far from the crushing heartbreak—if never far from the memory—of  the 1968 Prague Spring. Kierkegaard’s Orlando is neither so well-organized, ambitious, or politically aware, and yet, one senses an undeniable kinship between the two characters; they share an uncannily similar cynicism, the same benignly jaundiced way of looking at the world. One cannot help imagining the kind of conversations the two might have over a drink at some academic conference outsides the confines of time. Yet another happy surprise!


Adultery: The Scarlet Alphabet is enthusiastically recommended with several extra soupçon of pure full-throated gusto. Run, don’t walk, to get your hands on a copy of this one! 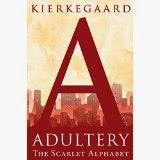