Nya Rawlyns’ Good Boy Bad is a novel with serious aspirations. It is a work of considerable, if not always consistent, substance, with moments of surprising beauty, delicate pathos, and deep insight. It is clearly the work of a gifted writer; one who has applied much thought and care to her craft, and wants us, in turn, to care about the characters she has so lovingly animated. It is also something of an eclectic mess, caught somewhere between its quasi-poetic literary ambitions and the surly bonds of genre convention, as if e. e. cummings had tried to turn out a screenplay based on one of Lee Childs’ Jack Reacher novels. Rawlyns cannot seem to decide what her book should be; a serious foray into the realm of magical realism, highfalutin literary erotica, gloriously tragic m/m romance by turns tender and gritty, or a straightforward road-trip adventure cum revenge fantasy, replete with safe houses and sniper rifles, chop shops and cabin cruisers crewed by sadistic Russian mobsters and ruthless Cartel pluguglies.


One of the chapters in Good Boy Bad is titled A Tone Poem, and this might well serve as a subtitle for the novel as a whole. Rawlyns’ style—when she is consistent with it—is dreamy and lugubrious:


The night wrapped him in sludge, humidity thick with despair, and he thought on the man in the basement with the dancers and his obligation to pick and choose for a purpose that made no sense if he wasn’t staying. But that was the problem. He had nowhere else to go, no one else to be, nothing from his past preceded the nothing of his future.


There was that man, the tall man with the cock straining against thumbs so thick and blunt he felt them ridging his ass, spreading the cheeks, splitting him apart. Invading him.


Spit pooled in his mouth.


The narrative unfolds at a glacial pace, dwelling heavily on backstory revealed in vague, disjointed fragments, like objects observed through breaks in a thick fog. I was tempted more than once to stop reading, continuing only for a sense that there might be an interesting story buried somewhere beneath this pretentious excess of style. Sticking with it was a chore at times. Trying to get to a point where the style could justify itself—where the story might begin to make sense—felt like a walk through ankle-deep mud in loose galoshes. Passages like this didn’t help:


Tank waited, waited an impossibly long time, before turning, turning to say the words, say goodbye like he meant it, but when he turned, he turned and turned and turned, spinning out and away and toward, and when he gathered the boy, the one not in the box, the one he’d near broken into pieces, the boy he loved so desperately it was going to tear both of them apart, when he gathered him in his arms, the boy whispered “I don’t have anyone else,” and the sounds of his heart shattering were the last sounds he heard.


Rawlyns' use of artful apposition all too quickly becomes a cloying affectation, and ultimately a kind of stylistic tic, maddeningly annoying. At times, the style descends into the absurd, as the author tries to get into the heads of characters who are basically inarticulate, and by nature not inclined to introspection:


Tank wasn’t now. Tank was yesterday, the day before, but now . . . now was this time, this place. He’d gotten used to now when it was then, but he’d come around to it again, a bad penny showing up, showing up to torture him. Like before. Now had turned different. It turned forever.


An attempt at straight prose then comes as something of a shock:


The cops in the cop room gave him wide berth, gave him looks, looks of respect from some, worry from others. The detective wasn’t pleased. Knowing a turf war was coming and they didn’t have resources made it hard to pull sympathy or co-operation [sic] from badges banking on status quo and padding for their retirement fund.


It is as if two very different books had somehow gotten jumbled up together. One—the dreamy literary excursion—might have worked well in a shorter, more concentrated form. In fact, if properly tailored, Rawlyns has the essence of a brilliant short story here. The other book, the too-conventional crime-genre revenge fantasy, needs its own space. The two very disparate atmospheres are jarringly inconsistent, together smothering what separately might well have been great.


And two small editorial nitpicks; the author or her editors seem to have missed the use of “discrete” when “discreet” was clearly intended. Also, in two places, Rawlyns refers to a gun’s “retort”. This might be an attempt at a quasi-poetic conceit, but it’s not a very good one; the word needed is “report”. (Honestly! Am I the only one who catches these things?)


While I do think there is a great deal to appreciate here, I cannot recommend this title. Ultimately, adventurous and patient readers will need to decide its value for themselves. 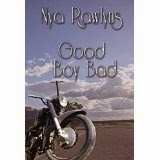 Posted by Terrance Aldon Shaw at 10:13 AM