Review of "Rye" by Sam Rosenthal


“We identify as genderqueer,” the narrator tells us, “GQ isn’t about who I fuck or my sexual orientation but rather my gender identification. Rye and I each see our genders existing somewhere along the gradation between male and female, somewhere outside the gender binary. Having a boi like Rye as my lover somehow feels right.


. . . Many people want there to be only one or maybe two choices . . . like male and female . . . but that’s a societal construct of the domination culture designed to reduce our options, limit our thoughts. . .

I like the way Rosenthal’s characters relate to one another; the feelings they inspire in each other; the very natural way they banter and play together—at least when they’re not obsessing about process.  It’s true. Smart people want the same thing as everybody else; we just insist on going on ad nauseum about meta-everything while getting it. Subsequently we complain that we are unhappy, other people think we are boring, and life is passing us by. Tracing chains of causality; working back to first principals; it’s the surest way I know of inducing a migraine while putting my party guests to sleep.  And so I was at first taken aback by the characters’ constant retreat into the metacognitive ether; it felt like bad narrative non-fiction or an overly preachy film documentary—the author makes little attempt to disguise his “evangelistic” motives.  But after a while, I relaxed and accepted that this was simply the way these people talk to each other—and what they say can be quite fascinating.


“I’ve thought a lot about that word ‘queer,’” I say. I’m still getting comfortable with it. It was a slur when I was a kid.”


“But there’s been a change in how people use it.”


“I know, hear me out. My interests are queer in the original eighteen-forties sense of the word. ‘Strange or odd from a conventional viewpoint. Freakish, unusual. I’ve always been attracted to people outside the mainstream. But when you get to the more modern ‘effeminate, unmanly.’ Then I start to bristle. Why do things have to be classified as manly or unmanly? You know there’s this Buddhist monk named Thrugpa, I really love his writing. He says ‘true reality is hidden by the labels we use. Things are, and then our mind tells us about them.’ Right! Can’t things just be? I’m just a guy. . .


This feels good. What does it mean? What does it matter? Why do we need to label things? Why? I was raised to think in classifications. Deliniations, Categories. Divisions.What went where and what wasn’t allowed to go where. Not just about sexuality, but about how to interact with the world. About the traits boys needed to hide and traits we were meant to emphasize. What would the neighbors say? I learned it is correct to be tough and insensitive, and never show you really care. Or cry. Or that you miss your pop. Or that there are things that turn you on that some unspecified ‘they’ say should not. I’m not afraid of getting fucky with men. I’m afraid of how the world will judge me if it finds out I like getting fucky with men . . .  I like being genderqueer. It’s vague. I wish I wasn’t concerned with definitions. No labels. Life would be easier . . .

Rosenthal’s prose is serviceable; not great or exceptional, and might, in spots, have benefitted from a more aggressive (or, at least, a less solicitous) editorial hand. The book is over-long, inflated by too much that is simply beside the point. The author has an annoying habit in narrative passages of remarking unnecessary detail—material that should have hit the cutting room floor on a first or second pass—dallying with banal arcana like a third-rate juvenile diarist. Especially in the novel’s second half, some of the sex scenes have the tired, warmed-over feel of superfluous reprise. The constant exchange of clichéd text messages does very little to advance the story or deepen our understanding of the characters, and becomes increasingly boring as the book wears on. Some artful narrative compression might have helped keep things focused—did we really need to hear about how Rye slept on the train from New York to Washington, and then slept some more on the return trip? Better self-editing could have enhanced word-flow; chopping redundant scenes could have given some portrayals a less artificial feel along with much greater emotional impact.


Readers who want to explore this world should naturally check their inhibitions at the door, along with any inflexibly prejudiced notions of what is and isn’t sexy. (Personally, I try to keep an open mind, especially when reviewing; I don’t judge anybody for their particular kinks, even if I am viscerally repulsed by some types of ritual humiliation, certain portrayals of group rape play, and pretty much anything involving Golden Showers or scat.)  Of course, we all bring our own personal set of hard and soft limits to any story we peruse; one’s earth-rending turn-on may well be another’s gorge-rising gross-out; the question is; do we allow our hang-ups to get in the way of an otherwise interesting and valuable learning experience? The irony is that many of those who would most benefit from the ideas presented in Rye will probably never read it, or stop reading at the first foray beyond their narrow comfort zones. More’s the pity.


While Rye certainly has its flaws—what book doesn’t?—it is a work of unique vision; the product of a serious passion; one of those unusual efforts that genuinely transcends the sum of its parts. Well worth a download. 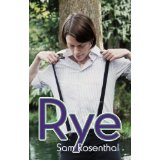 Posted by Terrance Aldon Shaw at 11:59 AM No comments: