Is there any style or genre that M. Christian can’t (or won’t) write in? After reading these two very fine short story collections from one of today’s most prolific professionals, I’m leaning heavily towards “no”. The ‘m’ in M. Christian seems to stand for “multi-faceted”, or possibly “mega-multi-tasker”. The guy certainly is versatile, as well as daring, imaginative, often funny, and seldom—if ever—unentertaining, one of those writers who seems to be everywhere at once, though if he has, in fact, cracked the saintly secret of bi-location, he’s not talking.
Betty Came, a gathering of half-a-dozen of Christian’s erotic short stories, is part of super-editor Maxim Jakubowski’s on-going Mammoth Book of Erotica series, which, to date, includes some of the best, biggest, and brightest names in contemporary sex literature. My only serious complaint about this present volume is that, with over 400 erotic stories to Christian’s credit, six is hardly a very satisfying sampling—rather like one of those teeny weeny boxes of Godiva chocolates that seem to appear out of nowhere during the holiday season, containing barely enough to whet a healthy appetite.
Not that what is here isn’t worth sinking one’s teeth into. I like the pungent, near-future-ishly noir atmosphere of Everything but the Smell of Lillies, its character’s perverse motivations, and the way the author plays a fearlessly seductive game of literary Chicken with one of erotica’s major taboos, skirting, but never straying completely over the line. I like the title story’s portrayal of life on the edge of subsistence and sanity, and, in The Colour of Lust (related from the point-of-view of a pool hustler’s perpetually frustrated girlfriend), the edge of love and ennui. But Christian always has his lighter moments, too, as in the darkly comic Regrets (think Boccaccio meets The Hangover), and the crafty foray into Steampunk in The New Motor:
It is not our place to say, via hindsight, what exactly happened that one particular night. It’s easy to dismiss, with scorn, or even a kind of parental, historical fondness, that he was just visited by vivid dreams, a hallucinatory fever, a form of 1854 delusion (after all, we smile, frown, grimace, laugh or otherwise; this was 1854); or some hybrid kin of them all; a vision one third unresolved traumas, one third bad meal of steak and potatoes, one third nineteenth century crippling social situation. What we cannot dismiss—because it’s there with miniscule precision, in detailed blocks of blurry type in rag pulp sidebills, in the fine filigreed pages of the genteel or just the skilled—was that John Murray Spear, a spiritualist of some quite personal renown and respect, did indeed depart Miss August’s Rooming House for Gentlemen of Stature (near the corner of Sycamore and Spruce in Baltimore, Maryland), and go forth to tell anyone who would listen—sand some did, as those newspapers reported and those diaries told—about his visitation by the Association of Electricizers . . .
The sexy bits aren’t bad either! Highly recommended. 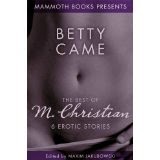 Readers get an even broader sense of Christian’s range in Love Without Gun Control, the author’s 2009 self-compiled and –published collection of short fiction, most of which originally appeared in genre anthologies, now-defunct niche-specific literary magazines and long-since cached or dead-linked websites. These fourteen stories run a dizzying—and impressive—gamut of mood and style, each with its own carefully measured ratio of light to shadow, buoyancy to seriousness, horror to humor, and hope to despair.
Christian has clearly learned from, and distilled the essence of the best examples of 20th-century American fiction, everything from Ray Bradbury and Jack Kerouac to Cormac McCarthy and Stephen King. He does not shy away from his influences, but has wisely allowed them to sing through him as he delves the deep, sometimes silly recesses of the American psyche. The title story is a broad, campy social satire in addition to being a pitch-perfect sendup of old Western movies and TV shows, while Wanderlust and Orphans pay dark homage to the uniquely American mythos of “the road”—think Steinbeck’s musings on Route 66 in The Grapes of Wrath, or the arid, windswept, dread-haunted vistas of Stephen King’s The Gunslinger and The Stand.
In Needle Taste, Christian shows that he is no less adept at horror of the decidedly psychological variety. Techno-thriller melds seamlessly with High Fantasy in The Rich Man’s Ghost; political satire meets The Zombie Apocalypse in Buried with the Dead, while knotty existential drama and the classic Post-Apocalyptic narrative come together in 1,000, and Nothing So Dangerous, a story of love and betrayal in a time of revolution. Perhaps my favorite stories in this collection are the beautiful, elegiac, Bradbury-esque Some Assembly Required, a narrative at once clever and poignant, and the brilliantly breezy Constantine in Love:
It was called The Love Shack, and it sold all kinds of obvious things: candy, flowers, poetry books, jewelry, balloons, perfume, lingerie, and many other sweet, frilly, and heart-shaped items. It stood alone, bracketed by two vacant lots. Its busiest days were just before Valentine’s and Christmas. It was described by many newspapers and tourist guides as “. . . the place to go when love is on your mind.”
The night was dark, the place was closed. The streets were quiet.
Then the Love Shack exploded—with a fantastic shower of fragmented chotchkes, and flaming brick-a-brack, it went from a shop dedicated to amore to a skyrocket of saccharine merchandise.  Flaming unmentionables drifted down to land in smoking heaps in the middle of the street, lava flows of melted and burning chocolate crawled out for the front door, teddy bears burned like napalm victims, and cubic zirconia mixed with cheap window glass—both showering down  the empty, smoldering hole that used to be the store.
A few complaints as well. In several of these stories, I found myself wishing for a stronger editorial hand. The text is rife with typographical errors and the kind of occasional omission of verbs and articles typical of the “cranked-out-in-a-terrible-hurry” manuscript. Several otherwise excellent stories (Hush, Hush; 1,000; Friday) are simply too long to effectively maintain the emotional impact for which the author aims. I found them overly repetitive and rather dull, with the narrative lines collapsing into nebulous incoherency. After all, the “short” in short fiction should be a clue to the essence of the form; all unnecessary baggage and ballast summarily jettisoned to achieve an economy of language, and, with it, maximum expression. These are all issues a good, personally detached editor, or even an honest beta reader might have helped to resolve early on. Christian is an established and well-respected editor in his own right, but no matter how skillful or perceptive an author may be as an editor of other people’s work, when it comes to self-editing, even the best and brightest have their blind spots.
Still, there’s far more to like and admire in this collection than to kvetch about or pan. Readers will be well-rewarded for what is, in the end, a ridiculously modest price of admission. Recommended. 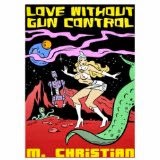 Posted by Terrance Aldon Shaw at 2:44 PM No comments:

Classics for the Big Brain is now live. This is a site dedicated to some of my "other" passions; classical music, record collecting, and movies.

EFTBB won't be going away; there'll still be regular posts with the reviews and commentary regular readers have come to expect. (Look forward to something new this coming Sunday.)

TAS
Posted by Terrance Aldon Shaw at 11:33 AM No comments:

Perfect light summer reading, here are two well-written, entertainingly steamy erotic romps with accessible, down-to-earth storylines, realistic, relatable characters, and a surprisingly intense turn-on factor. (Let’s be frank here; I read so much erotica for review that it is quite rare any more for me to experience a physical reaction. The philosopher David Hume spoke of “the proper observer” of a work of art; the observer who, under the right conditions, can appreciate, understand, or simply “get” what an artist is trying to do, and, even when it comes to erotica, oftentimes I wonder if I am that proper observer. Here, my body left little doubt about my ability to “get it”, exhibiting the kind of reaction I'm pretty sure both authors were looking to elicit when they sat down to work, or, at least, the male equivalent of that reaction, which is certainly a credit to their descriptive abilities.)


On a more cerebral level, what I like about both stories, is that these authors have made an effort to get into their heroine’s heads, and stay there, describing not only the complex of novel physical sensations each experiences, but their emotional response to those sensations, their (usually futile) attempts to put them into some kind of rational context. (How will feeling this way affect my life? How will doing this thing that is objectively so wrong, but feels so damn good change my relationship with the other people in my life?)


Both authors tell their stories from the point of view of a sexually-frustrated heroine. Elizabeta Brooke’s Susan and Nadia M. Joliet’s Ariel are both self-described “good girls” who (initially at least) would “never do anything, you know, like that”. Stifled by claustrophobic convention, hemmed in by inhibitions too-long unquestioned, both women are in or recently escaped from unsatisfying relationships with inadequate (lazy, unimaginative, unmotivated, cheating, out-of-shape) significant others to whom they constantly compare the exciting, mysterious, handsome, oh-so sexually adventuresome strangers they encounter. It’s sheer escapism, and clearly resonates with many readers.


The general plot description makes the story sound mundane, almost like a softcore vignette, far more ordinary than it truly is. Susan, a thirtysomething housewife, reduced to selling cosmetics door-to-door (what in the states we call an Avon Lady) rings her best friend’s  bell, only to be met at the front door by the friend’s handsome eighteen-year-old son in nothing but a towel . . . and you can probably guess where things go from there. Except that Brooke has a few interesting new twists and turnabouts with which to surprise her readers.  The story is too short either to excerpt or fully synopsize, so I will simply recommend the book, and let readers happily discover those twists on their own. 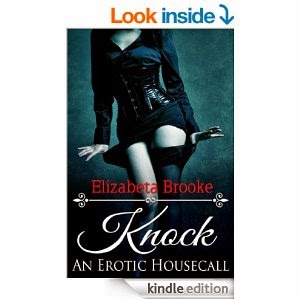 
Nadia M. Joliet’s Year Abroad (Parts 1-4) falls comfortably inside the lines of erotic-romance convention; pure genre fiction, but genre fiction at a high level of competence and craftswomanship that sets it pleasantly if not-too-far apart. Ariel, an American YUPPIE, fresh from a bad breakup and the subsequent dissolution of her stolidly predictable life, seeks new experience in the tourist hostels and on the beaches along Australia’s eastern coast. Needless to say, there are lots of “hot guys” to help Ariel get her groove back, with very little in the way of inhibition or plot conflict to interfere with their good times. Of course, we get the romance heroine’s never-ending self-doubt, the obsessive-compulsive second-guessing, and the perpetual analysis of  every move the current object of her fancy does or doesn’t make, with lots—I mean LOTS—of good, vigorous, rafter-rattling sex in between. It’s good, it’s fun, it’s undeniably lubricious, and well worth a look. 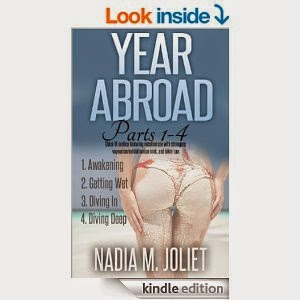 Posted by Terrance Aldon Shaw at 11:33 AM No comments: