She is by far the hottest kindergarten teacher I’ve ever seen in my life—the smokin’-est one I’ve ever dated for damn sure. Cindy’s shoehorned into a cute summer dress that leaves her arms and shoulders bare. A tad tight around the hips, its gay floral pattern accentuates her elegant curves with beguiling efficiency. She is all legs and ass tonight, and it’s all I can do to keep my watering mouth from overflowing. I am hopelessly captivated by the subtly sculpted flow of her flesh, and the cool updo that keeps her long black hair off the back of her neck only heightens my excitement

The drunks in the parking lot would seem to agree. They’re drawn like pheromone-crazed mosquitoes, and for a moment I’m not sure we’ll make it to the car in one piece.

“Must be the full moon,” I mutter.

“Just ignore them, Colin.” She’s right, of course, and I try my best, even as the mood, so carefree and flip only a moment ago, turns dead serious. The first nauseating trickle of adrenaline enters my bloodstream, pushing a curve of latent machismo and pure old-fashioned jealousy. I’m the one who’s supposed to be protecting her.

“Sure,” I humor them with a fib, “We were just on our way to a family reunion—weren’t we, sis?”

I can already feel Cindy’s disappointment with me—but hey! I’m a guy after all.

“Uh huh.” I’m not yet sure what sort of drunks I’m dealing with; amateur, professional, happy, mean, aggressive, sullen, querulous—or maybe something else altogether. “See you guys around, alright?”

“D'yuh hear what I shhaid, buddy?” the talkative one talks to me without once taking his bloodshot eyes off Cindy’s naked shoulders. Damn! Who knew drunks could multi-task?

“Right,” I put an incestuous arm around my fake-sibling’s waist and start fast-walking her towards the car. I worry that I’m being a little too brusque with her, that my handling’s a bit too far to the rough end of the spectrum. But it’s probably better than actually losing it.  I mustn’t let that beast out of its cage—not after things have been going so well. I’d really like to get laid at the end of the evening, and the last thing I want is her thinking I’m some kind of asshole with anger management issues—even if it might sort of be true.

The drunks shamble after us like a curious herd of housebroken zombies.

“Hey! Where ya goin’, fella?” The aggressive one—the multi-tasker—puts himself in our path, “We was thinkin’ about havin’ ourselves a little party—”

“How nice for you.” I’m trying to envision a scenario that doesn’t end with a couple sucking chest wounds or a dozen sweaty dicks up my date’s bleeding bumhole. “Good luck with that.”

“—and we’ve decided to invite your Sweet. Little. Sister.” He puts a slobbery spin on the last word, leering openly at Cindy’s boobs.

“Look man, we don’t want any trouble here. We just want to get in our car and leave . . . like right now.” I’m trying to stay calm for Cindy’s sake, but my shirt is soaked. My sweat’s like burning acid, eating through my collar.

“You can leave,” the loudmouthed one says, “s’long’s she stays.”

“No way that’s gonna happen.” The anger’s rising in me now for real. “I don’t think you understand—”

I want to argue, but she shoots a furtive pair of daggers in my direction, a look that clearly says ‘don’t’, and somehow, I manage to keep my trap shut.

“Hey there, big guy!” She saunters up to the ringleader, swinging her hips like a bimbo in heat, “I’m Cindy. What’s your name?”

He has to think about it for a second.

“Nice to meet you, Jax,” she takes another step forward, close enough to give him an eyeful of cleavage as she extends her hand. “So, what did you and your friends have in mind?”

“You were saying something about a party?”

“’Cause I can show you a real party!”

“I’ll bet you can,” she murmurs sultrily, “Why don’t you lean over a little so you can whisper in my ear and tell me all about it?”

I want to vomit. It’s not just the idea of this interloping lowlife slip-sliding his filthy hams all over Cindy’s scrumptious peaches and cream, or the way he’s mildewing the inside of her ear with his sour yeasty breath, or even the fact that she’s letting him do it. No. It’s something else—something about these guys I can’t quite put my finger on . . .

I can only describe them by what they’re not. They’re not frat boys—a tad too old, not rowdy enough by half, way too quiet, and their shirts don’t match. Not bikers—no chains, no leather, and, anyway, where are the bikes?  Not surfers—well, that’s just obvious. Not a pack of Wall Street wolf cubs. The arrogance is there but it’s not the same kind. These aren’t the sort of well-dressed, self-entitled mega-douche diptards who wave a wad of cash under a pretty woman’s nose and think that buys her for the evening. Not rednecks or hipsters in spite of the bad teeth, greasy beards, and grungy flannel. Not cubicle-dwelling wage slaves, or undercover cops posing as blue-collar methheads, or anything I can think of except maybe—

She holds up an index finger to silence me. Jax is practically doubled over on top of her, bowing her upper body backwards beneath his considerable weight. She reaches down and cups his bloated crotch in her palm, whispering something in his ear as she begins to squeeze.

“Oh yeah, baby!” he roars, throwing his head back in crapulous triumph, “Wooooooo-WEE! We gonna have ourselves one hell of a party to-NIGHT! Ahhhh-OOOOOO . . .”

The other drunks take up the chorus, lifting their heads to the sky and baring their teeth—their incredibly long, sharp, yellow, great big the-better-to-eat-you-with-my-dear canines that probably haven’t seen the inside of a dentist’s office since the last time dentist was on the menu.

“Thought so,” Cindy wrinkles her nose in disgust, reaching back to pull a long pin from her hair. “You werewhack-jobs really cheese me off!”

Jax is bending back down, looking to give Cindy a hickey she’ll never forget—or survive. But the thing in her hand has magically morphed from a simple silver hairpin into a telescoping stiletto the size of a 10-gauge knitting needle. Her hair falls bewitchingly around her shoulders as the knife finds its way deep into the center of Jax’ left eye—or, at least, what’s left of his left eye.

“Language!” she knees him in the groin, yanks the hairpin from his eye and plunges it into his heart.

“You fucking bitch!” Jax slumps to the pavement, doubled over in pain. Cindy plants a stylish but practical heel smack in the middle of his chest, pushing the last of the air from his lungs.

“Not so tough anymore, are you, buddy!” She surveys the parking lot, glaring at the cowering werewinos who remain, their own eyes now dilated more from fear than beer. “Anybody else want a piece?” She looks slowly from one to another as if to say ‘C’mon! Make my weekend!’ No takers.

“Boo!” she shouts, and the werewhatever-the-hell-they-ares scatter to the four corners of the night.

“What were those things?” I’m still trying to get my head around the casual act of manslaughter I’ve just witnessed.

She shrugs, her beautiful shoulders softly aglow in the moonlight, notwithstanding the gruesome arterial spatter down the front of her dress.

“Who knows? Probably just a bunch of garden-variety werewankers. Maybe some kind of survivalist douchebag-hipster hybrid. Whatever, they won’t be bothering us again.”

“Hey! You’re not all weirded out, are you, Colin?”

“’Cause that would really be too bad, you know?”

“I mean, I was having a super-nice time up until—”

“Oh, god, yes! All things considered, it was one helluva great date!”

“So then, do you think you could drive me back to your place—like right this minute?”

“I wouldn’t normally ask a guy after the first date, but, for some reason, I really need a shower, and your place is closer—”

“That, and there’s one other thing—” 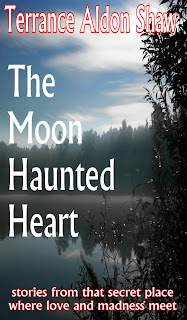 Posted by Terrance Aldon Shaw at 1:32 PM No comments:

Story by TAS on the Microstory-a-Week site

My short story, Señor Gordo, is featured this week (October 14-20) on the Microstory a Week site. Read it here:

http://www.microstoryaweek.blogspot.com/?zx=b5b5f5ab45ba7612
Posted by Terrance Aldon Shaw at 1:01 PM No comments:

Review of 'Counsel of the Wicked: Rebel Mage Book I" by Elizabeth Schechter

Let me count the ways I like this latest offering from Elizabeth Schechter!
Counsel of the Wicked (Rebel Mage: Book 1) is an exciting, fast-paced, genre-bending m/m romantic adventure; distinctively imaginative, sexy, thought-provoking, heart-warming, compulsively page-turning, and one heck of a cracking good read. Of course, all this is what her fans have come to expect from Schechter, a bona fide mistress of the storyteller’s craft with a hyperactively wide-ranging imagination, and a no-lesss impressively puissant intellect coupled with a preternaturally acute sense of focus.

Counsel of the Wicked is the story of Matthias, a young man living as an outcast on the fringe of a post-apocolyptic religious community under the rigid patriarchal control of an outwardly pious elder. But when the elder’s son falls in love with Matthias, the old man sees to it that the pariah is summarily packed off to a notorious correctional facility known as The School.  Suffice to say, everything Matthias thought he knew about his world and the people who govern it--not to mention himself-- turns out to be a lie.

It’s probably not wise to offer too much more of the plot, lest spoilers be revealed. But oh! What wonders (and horrors!) there are to be discovered. And Schechter has hardly begun to explore this vast and intriguing magical paracosm of hers. (I understand that a pair of sequels is in the works—a wise move, since this first installment is bound to leave fans hungry for more.)

This is genre entertainment with a brain! Above all, it’s the consistent quality of Schechter’s writing, along with the deep love she possesses for her characters that sets Counsel of the Wicked apart. 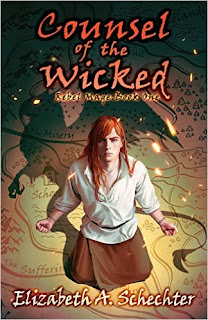 Posted by Terrance Aldon Shaw at 9:03 AM No comments: