So, there are these two writers walking down the street, and they’re headed towards the same intersection. One’s a joke writer—we can tell because he keeps talking to himself and cracking up at his own material. The other one writes erotica; we can tell it’s erotica and not porn because he always types with both hands—you’d be amazed how many pornographers you can catch single-handed. Anyways, these two guys bump into each other at the intersection like a schlemiel and a schlimazel, and their latest manuscripts get all mixed up together. That’s when the joke writer—let’s call him Mr. J—turns to the erotica guy—who we’ll refer to as Mr. E—and says “Hey! You got smut all over my gags!” To which Mr. E replies “No wonder you never shut up! And look at this; you got funny all over my sex!” J picks himself up and says “Your sex was already plenty funny, buddy—I mean, have you actually seen it on a cold day?” E looks around and says, “Never on a first date.” Mr. J says, “Gosh! Since when did you start dating yourself?” Mr. E says “I’d heard it was good for the prostate.” J says, “Now that’s really funny coming from a guy who types with both hands.” Mr. E bends over and starts picking up pages from out of the gutter. “My,” he says, “you’re really ‘on’ today, aren’t you, Mr. J?” “Hardly,” J replies, “everybody knows you’re just a little moron, Mr. E.”  [Insert rim shot here.]


The first thing you should know about Jeremy Edwards is that his jokes are a lot better than mine. The Pleasure Dial is a laugh-out-loud sexy; tickle-me-till-I-pass-out funny, brain-gasm-inducing work of sheer genius, and one of the most scrumptiously entertaining novels—erotic or otherwise—I’ve had the pleasure to read in quite some time; an unforgettable, couldn’t-put-it-down, never-wanted-it-to-end reading experience, the sort of which have become increasingly all too rare nowadays.


The Pleasure Dial transports us to the thriving entertainment world of 1930s America, dominated by radio and the movies, recently reborn, if not always reinvigorated, with sound. The story is a lovingly irreverent homage to that golden age of radio comedy (Jack Benny, Abbott and Costello) and the great screwball romps of the day, without the pesky Hayes Code censorship—think Carole Lombard and William Powell in My Man Godfrey or Rosalind Russell and Cary Grant in The Front Page with the same razor-sharp double-entendre-rich repartee and considerably fewer clothes. The veritably Shakespearian ins and out of the plot are summarized by chief protagonist, radio gag-writer Artie Plask, thusly:


“Here’s what I have on my list so far: (1) A radio show in which the star, an irascible and conceited Hollywood legend is doing comedy when he thinks he’s doing drama—and he mustn’t find out. (2) A second radio show, whose star, though a dream of an employer in and of herself, is viewed with suspicion by star #1 because she is an intrafamily rival. (3) A fledgling mannequin manufacturing company that we’ve promised will show a profit shortly, and with whom my personal appearance is so closely identified in the suspicious mind of radio star #1 that I am forced to wear a disguise in his presence—because he mustn’t find out that the mannequin executive who stood up to him is really one of his own writers.”


If you think this sounds like something with the potential to be hilarious, you’d be right. The jokes fly fast and low, sneaking in under the blood-brain barrier before we even get them, and when we finally do, we have to mark our place and take a few minutes to roar till the belly is quite literally aching with pleasure!  The “juicy parts” aren’t bad either, especially considering that Edwards’ special brand of funny is on the sex like white on rice.  Reluctantly, I have to limit myself to only three short examples:


He lowered his ass to the edge of the bed, his hard-on wrestling his thigh for top billing. Your jokes made me laugh today,” she continued. This was his kind of foreplay. “Which one did you like best?” “The one about ignoring.” She tittered at the memory. There’s a customer waiting and I don’t want to ignore him. I don’t want to, but I’d like to. Yes, that would work well in Heffy’s voice. “Thank you. That’s a subtle one.” “I love that word, don’t you? Subtle. It sounds like a softly licking tongue.” Artie knew a song cue when he heard one. He pulled the sheet away from her body and focused his attention on the sex-damp blond fur he’d thereby revealed.
Or this:
Elyse blinked back tears as she backed the car out. “Yesterday my life was perfect; a house full of laughter-conjuring, clitoris-pleasing heroes. Apart from the nuisance of having to keep my clothes on whenever Daddy was around, the place was paradise on earth.”
And this:
The face of Elyse Hefferman being tongued to orgasm by the head-giving head writer had to be the most compelling thing that had ever appeared on this stage, thought Artie. Elyse, one could tell, approached every climax with the control and self-assurance with which a painter approached a blank canvas. The artistic mastery expressed in her face was overlaid with sensory pleasure, burgeoning arousal, and erotic anticipation—hers was the fiery-eyed face of a genius watching her creation come to life exactly as she had envisioned it.


Can’t you see a young, ditzy Carole Lombard as Elyse? For Artie’s fast-talking, even faster-thinking, comedy-writing girlfriend, Mariel Fenton, my imagination cast Rosalind Russell. And then there’s the beautiful, Garbo-esque Lila Lowell, every-man's-fantasy sexpot of the silver screen, who really does want to be alone—in her modest, book-lined bungalow, playing checkers with her lesbian lover. Edwards gives us, if not a cast of thousands, a vast troupe of memorable, wise-cracking supporting characters who can trace their laugh-lines back to Vaudeville and the Catskills; Jack Benny, Fibber McGee and Molly, the Marx Brothers, The Great Gildersleeve, Abbott and Costello, and the list could go on and on.
Jeremy Edwards is that rare writer who is at once a consummate professional and a gifted entertainer. His well-polished prose are unfailingly engaging; his style sometimes cerebral, yet always affably accessible. Charming, sexy and smart, wry and rollicking, intoxicating and, oh yes, funny as hell; The Pleasure Dial is enthusiastically recommended. 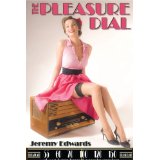 Posted by Terrance Aldon Shaw at 11:02 AM