Review of short-story collections by I.J. Miller and Sharazade

Sex and Love by I.J. Miller


“Show, don’t tell!”  What the hell does it mean anyway? The phrase has taken on the musty stench of dogma in the dark satanic mills of English pedagogy; repeated and echoed like a sacred mantra in junior-college lecture halls, extension night classes and continuing-education seminars wherever “creative writing” is supposedly being taught. “Show, don’t tell” we are told again and again, though seldom shown a reason why. In Self-Editing for Fiction Writers, Browne and King insist that “thanks to the influence of movies and television, readers today have become accustomed to seeing a story as a series of immediate scenes . . .


Narrative summary no longer engages readers the way it once did.   Since engagement is exactly what a fiction writer wants, you’re well-advised to rely heavily on immediate scenes to put your story across. You want to draw your readers into the world you’ve created, make them feel a part of it; make them forget where they are. And you can’t do this effectively if you tell your readers about your world secondhand. You have to take them there . . .” (2nd edition, 2004, pp 8-9)


I suppose it’s true that once you’ve seen Star Wars Episode IV you can never again abide the pedestrian pacing of 2001: A Space Odyssey, let alone those long drawn-out stretches of silence in the genuinely silent vacuum of space. Still, have readers really turned into such slack-jawed, mush-brained, dull-witted, attention-deficit-suffering rubes over the last several generations? (I realize this may be the wrong question to ask in light of the seismic success of Dan Brown, Dean Koontz, Stephanie Meyer and E.L. James, not to mention ratings for Honey BooBoo or the latest Kardashian-infested “reality” show.)  Sorry, I don’t buy it. It’s bullshit. If we’re going to have a catch-all dictum for effective fiction-writing, it should be “Damn the dogmas! Engage the reader, anyone you can.”


What I look for in any successful anthology is variation and contrast. Each story should be unique, with different characters speaking in their own distinctive voices, from varying points of view; diverse settings, shifting tempi, new and unfamiliar conflicts and struggles. Without some creative attempt at “mixing it up” a story collection can feel like a concert in which every song is played in the same key at the same tempo; each song may well be lovely in its own right, but eventually, the subconscious gets tired of hearing the same old key in the same ol’ same ol’ time, and goes into sleep mode.  The beauty of any anthology—or well-programmed MP3 player—is  the freedom users are afforded to dip in here and there, casually at any point, picking and choosing stories that look good like desserts at a smorgasbord, leaving whatever may not suit their tastes at the moment. If I have any complaint that may apply equally to Miller’s Sex and Love and Sharazade’s Transported, it is that both suffer from too little variety and too much same-ness of tone and timing.  This is in no way to say that there’s not a lot to like in both collections—both are warmly recommended—potential readers should simply be aware of what they’re getting into. 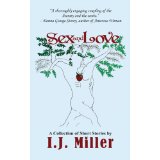 
In the twelve short stories featured in Sex and Love, I.J. Miller tells a good deal more than he shows. Nonetheless, there is some very fine, imaginative writing here, and the author always trusts his readers’ intelligence—something increasingly rare and refreshingly welcome. One hears endearing echoes of John Cheever in the way Miller presents his characters’ backstories; the way their rather conventional aspirations are explored, the very ordinariness of their dreams. Cheever’s style may seem dated nowadays, his reliance on secondhand narrative as quaint as his ‘50s suburban-middle-class sensibilities; yet his insights still ring universally, poignantly true, and Miller has learned the older author’s lessons well. The most revealing human truths; the most compelling drama is often discovered within the commonplace; the most seemingly ordinary moments in our lives in which the deepest understanding is born. Throughout Sex and Love, Miller demonstrates a talent for probing psychological complexity, often revealing the pain and poetry of dysfunction in surprisingly entertaining ways.


Highlights of the collection include the first two stories, Lonely Man, a cautionary tale about what happens when we allow ourselves to be led by the “little brain, and Cell, perhaps the best of the lot, an imaginative depiction of a thoroughly modern seduction. Things We Shouldn’t Do takes us into the head of an assistant manager at a Caribbean resort, who accidentally discovers his wife’s dalliance with a co-worker, and finds his life infected with cancer-like doubt. Cyberslut is a fascinating look at identity and self-perception in the surreal world of on-line sex chat; The Bachelor, a Rashamon-like rehash of events that may have happened or might still occur after an encounter in a strip club; Tennis Pro, most Cheever-esque of the stories ends on a touching but deeply gratifying note, as does Husband and Wife an authentic reflection on how marriage changes a couple, with an entertaining, satisfyingly sexy ironic twist at its climax.


There’s much to commend here, even if the language isn’t always as fluently adept or finely finished as we might have wished. At times, it feels as if the same narrator has insinuated himself into each successive story, so there isn’t enough contrast to keep things as interesting as they could have been. Still, on balance, Sex and Love is an admirable achievement, offering abundant rewards to the serious reader.  Sample the stories at random, take your time, and enjoy.


[Note that the longest story in this collection (as well as its weakest link), Single Woman, has also been published separately under the title, Climbing the Stairs.] 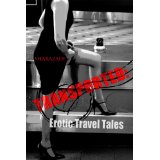 
In Transported: Erotic Travel Tales, Sharazade employs a very different method for engaging her readers, namely, by bringing them directly into the stories as characters themselves.  Seven of the nine stories in this collection employ a “shared first-person” point of view, with the author referring to herself as “I” and to the reader as “you”.  This lends a certain immediacy to the proceedings; an added layer of intimacy and excitement that many readers will find compelling in small doses. (The convention does tend to get old after reading a few stories one after another.)  The author’s style is relaxed and informal, in an easy-going vernacular, engagingly explicit but seldom off-puttingly vulgar. Each story revolves around a different destination or mode of travel, lending a nice unified feel to the compilation as a whole.


Other highlights include Sales Pitch, in which a twentysomething sales clerk in an airport “travel store” enjoys a steamy encounter with a customer; Just Browsing, relating an anonymous—but all the more arousing—encounter in the art section of a bookstore. As the narrator peruses a book of shunga (classic Japanese erotic prints), a stranger looks over her shoulder, and soon the two of them begin to act out the stories depicted in the prints.  Shore Leave colorfully evokes an early-morning sexual encounter on a beach. Onsen tells the story of a lovers’ weekend at a hot spring hotel (onsen) in Japan; this story is considerably more detailed, and delves more emotional depth than any of the others. (I was happily reminded of a similar episode in Donna George Storey’s Amorous Woman, which is, in itself, quite a recommendation.)


Transported is a quick and easy-to-read collection that may be just the thing to while away a few dull hours on a long layover or sit up with through the night in coach on a train. (Be careful, though; you never know who might be looking over your shoulder!)  Readers in the mood for well-written, simple sexy escapism won’t be disappointed.
Posted by Terrance Aldon Shaw at 2:19 PM