“There’s a richness of experience where desire and addiction collide,” Big Ed Magusson tells us:

The twelve stories in this bold, surprising, sometimes shocking collection will certainly challenge those readers too long addicted to the jizz-stained tropes and dog-eared familiarities of mainstream erotica, those diffident souls afraid to venture too far beyond the narrow comfort zone of fossilized adolescent fuckery. Addictive Desires is not an “easy” read or a quick stroke, and, for once, the “adult” label is not some smarmy, cynically-applied euphemism. This is, quite literally, a book for grownups.

Big Ed Magusson has been turning out a steady stream of competently crafted erotic stories for more than a decade, and many of these can be found on his exemplary website Big Ed’s Place. In October 2012, I reviewed his novel The Ugly One, along with the short story collection Unexpected Sights and the superb short Irie No Kabutsu, which I later included on my Best of 2012 list here at Erotica for the Big Brain. Where I dinged The Ugly One especially for what I deemed too conventionally predictable storytelling and characters who were far too “nice and agreeable”, Addictive Desires is written with a greater confidence, freedom and the daringness to disturb. The narrative voice is more assured, less stiff, the language flows more fluently—the author has begun to make the words work for him, and it all feels much less caged-in and canned.

There are still a few spots where the dialogue is a bit too rigid, conversations too direct and lacking subtle subtext. I’d have wished for exchanges outside of group therapy sessions where the participants occasionally talked past each other, interrupt, change gears, and start off on dead-end tangents, or were more artfully reticent, using effective “stage business”, gestures and silent pauses where they would  ignore hard questions or avoid direct answers altogether. There’s a fine line between “showing” or revealing character through dialogue and employing those characters as mere devices for injecting large amounts of data into a story. Granted, to his credit, Magusson isn’t trying to write like Elmore Leonard, but dialogue in which people always say precisely what they mean, listen respectfully before answering each other directly, honestly, and thoroughly, can get a bit old in fiction, even if it’s what we might wish for more of in real life.

Still, when Magusson’s language is “on” it is solidly “on the money”, as in this descriptive passage from More, the fourth story in the collection:

But that didn’t mean I liked the video booths. They weren’t that clean for one. Yeah, you could see where the attendant took a mop to them every night, but he never got the corners. The faded paint had probably once been off white, but now it just looked off. The dingy single overhead bulb didn’t help.

But the worst was the smell. Half-rotted fish mixed with BO that had found an old sneaker to crawl into and die. The air freshener masked it about as well as the cardboard covered the glory hole in the walls. It always took me a long time to grow inured. Kelli didn’t seem to care.

But why should she? Once we walked in the door of that adult novelty store, she became queen bee. I’m sure the truckers from the stop across the highway and the lonely salesmen with territory to cover couldn’t believe their luck. A college girl in here? Dressed like that? They dropped chins so low I could count their gold molars.

“I enjoy stories about misfits”, the narrator of Old Dogs tells us, and he himself is a kind of archetypal misfit, like many of his fellow characters. At their most starkly realistic, their stories can send us reeling, dredge up the messiest, most painful memories, or trigger terrifyingly vivid flashbacks. To admit the horror that lies within, to come face to face with one’s demons, to be hollowed out in order to be filled with something healthier if not to be healed, whether in the relative safety of therapy or in the scary, spontaneous wilds of everyday existence, may be the most profoundly painful and deeply humbling experience of one’s life. In the end, anyone strong enough to admit his past wrongs, the hurts he has inflicted and can never again not feel himself, is faced with a stark choice; if we use our past as an excuse to shrink from life, we will end up having never lived. (So it is for Gordon, the narrating main character of Every Seven Seconds, who misses out on the possibilities of real human connection because he wastes too much time lost in fantasy—this story, the first in the book, has the feel of a fable, complete with an ironic “moral”.)

For many, including myself, writing can be a very effective form of therapy. Some writers manage very well to sublimate their fear and anger, the ugliness of their own self-loathing pasts into something cathartic, edifying, and hopeful.  But this process, too, is not an easy thing, it can be knotty, excruciating, soul-wrenching, despite the slick craftsmanship and assured professionalism of the end product.  Probably the best, most original stories in this collection are also the toughest ones to take.

White Knuckles is a masterpiece of inner monologue. The reader eavesdrops on a young man’s  ethical and physical conflicts as he argues with himself about whether to take advantage of a faithless “friend” who lies naked before him, drugged and passed out at a frat house party. This writing is highly realistic, morally complex,  and light years beyond the simplistic “angel on the shoulder” black-and-white movie-of-the-week dualism that passes for morality in the popluar conscience nowadays. As Magusson remarks in his afterword: “That speedball mix of emotions? It includes rage”, and he has brought that rage home with devastating effect.

Methadone may be one of the bravest pieces of writing I’ve ever encountered—and one of the most singularly disturbing. A man who molested his daughter, struggles with his unquenchable obsession for her, going so far as to hire a roll-playing sex-worker to reenact his crimes. We are disgusted and sickened by this man, and yet, by the end, we cannot help but feel a certain sorrow for him, even a tinge of pity for his helplessness, his utterly pathetic plight.

And suddenly it’s too real. Claire, Jenny, Jennifer—they blur together and all the bad memories explode in my brain. Jennifer’s words ring in my ears. Pain smashes into desire and longing. Shame envelops and overwhelms me.

I burst into tears. Claire rolls away from in alarm, “What the fuck?”

I sob deep, and then sob some more.

“What the fuck is going on?”

I shudder and try to catch my breath, but fail on the first gasp. After the third, I look up to see Claire has backed away from the bed and is staring at me.

“That’s what she said,” I spit out between sobs. “Those were her exact words.”

“The oral wasn’t just a fantasy?”

I’m too shaken to reply.

“I can’t do this.” She gathers up her clothes. “This is sick. I thought I could but I can’t. I’m not doing this again.” She heads to the door. “Don’t call me ever again.”

“Wait!” I shriek. I lunge forward, which makes her flinch. “I need you!”

This is one of those stories that should be read widely, but very probably won’t be given the public’s enduring dread of conflict and controversy.  For all its sickening horror, it is a story that needed to be told, though its effects are grimly haunting, deeply sobering, saddening, and, for some no doubt, it will stir up a good deal of anger.

My favorite story in the collection is probably Wolf, an insightful, realistically positive portrayal of a successful older man who must keep his sexual appetites at bay “one day at a time”. “My place isn’t here, but it’s where I am,” he tells us. Where he presently is is at his son’s wedding, and the story follows him through the chaotic and joyful day, looking back on the sordid defeats and strengthening struggles of his past while revealing the temptations that still spring from that past like toxic weeds in the present. The ending is positive and uplifting, and, after reading it, I am convinced that Big Ed Magusson is a man with his eyes wide open, a storyteller with the brutally honest sensibility of a realist, along with the abundant empathy of a hopeful idealist; a writer with an abiding affection for humanity, and a powerful gift for illuminating the fraught, bewildering complexities of the human condition. 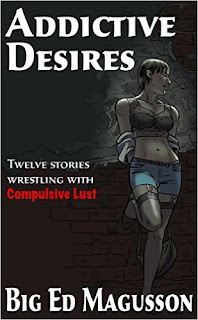 Posted by Terrance Aldon Shaw at 11:05 AM