Horror and erotica are sisters under the skin. At root, both forms are transgressive, setting out to elicit strong visceral responses by stepping outside the boundaries of acceptable, ‘polite’ behavior.  As W.J. Renehan suggests in The Art of Darkness, “. . . horror fiction effectively lifts the constraints of social, sexual, and moral codes for our entertainment." Yet, it’s interesting to note that sex in horror films is almost always a harbinger of doom. The teenagers who can’t keep their raging hormones in check are invariably the first to die a grisly death at the hands of the villain, monster, or fiend du soir. This by-now well-worn trope—a lingering vestige of punitive Puritan morality that, like a zombie, simply refuses to die— is so taken for granted in the genre that it became the basis for parody, if not outright ridicule, by the late Wes Craven in his Scream trilogy, and more recently by Joss Whedon and Drew Goddard in their meta-horror masterpiece, The Cabin in the Woods.

In the early 21st century, the zombie has captured and dominated the collective imagination like few other paranormal entities, and it’s not difficult to understand why. The zombie plays on our most fundamental apprehensions, fears and phobias; vast armies of dead things that don’t know they’re dead, corpses that won’t stay buried; a contagion from which no one among the quick is immune, no matter how watchful or cautious, normal or righteous, well-prepared or healthily paranoid. The undead evoke our reflexive disgust, forcing us to confront some of our most deep-rooted taboos; cannibalism, ghoulism, necrophilia, pure animal appetite without consciousness or conscience; social decay and anarchy. The mythos has been imagined and reinterpreted with a wide range of subtle—and often, not-so-subtle— variations, from the shambling, now almost quaint-seeming revenants of George Romero’s original Night of the Living Dead (1968) to the more fleet-footed and exponentially-more bloodthirsty hordes of Robert Kirkman’s The Walking Dead. (I’d also be remiss not to mention Edgar Wright’s hilarious genre send-up Sean of the Dead from 2004.)

But what if a spark of self-awareness remained? A hunger for more than meat? A desire to consume human flesh in a very different way? Heightened senses, telepathy, even acute emotional awareness—albeit often confused by instinct? What could more effectively lift the constraints of normality than the quasi-necrophilic notion of sex with a reanimated corpse? For that matter, what would happen if a zombie girl—perhaps a little more than halfway through the change— walked into a butcher’s shop and applied for a job? (Rose Caraway’s claustrophobic, moody Devil Winds in which the hot late-August Santa Anna winds of southern California become a virtual character in the drama.) What if the last two survivors of a zombie apocalypse and a subsequent tsunami found themselves drifting out to sea on an improvised boat, only to discover that one of them might have been bitten before casting off?  (Tamsin Flowers’ harrowing, darkly sensual The Only Girl in the World)

Of course, more things other than zombies populate these pages. There are succubae and serial killers, werewolves, demons and vampiric wraiths, all brought to vivid, terrifying, luridly undead life by this hyper-creative cadre of writers. Jade A. Waters’  The Lucky One figuratively borrows a page from Todd Browning’s Freaks, with its portrayal of a paranormal sideshow complete with werecarnies, a thigh-dampeningly charismatic ringmaster, and audience volunteers for a live sex exhibition like no other. Something wicked and very sexy this way comes when a handsome doctor finds himself locked up with the inmates of an early-20th-century mental asylum in Mallin James’ shatteringly twisty, highly satisfying Alice in the Attic. Allen Dusk’s neo-gothic Damaged Melody conjures a storm of dark images while leaving a fair amount of mystery beyond the margins—enough to keep readers guessing long after the final paragraph.  Raziel Moore’s Spell Failure plumbs the occult with an intense, vividly-imagined, extended scene of demonic ravishment and a frightening cautionary tale of misinterpreted desire and good intentions gone horribly awry. Remittance Girl’s The Night That Frank Scored  is a delicious, macabre-ly tongue-in-cheek reimagining of the demonic-sex mythos, with a somewhat cynical, mind-reading succubus who picks up an apparent loser in a bar, only to change his life in the most unexpected and amusing of ways.  Janine Ashbless’ The Sorcerer’s Apprentice closes out the collection with an equally-scintillating story about a succubus; this one held captive by a well-heeled occultist. Needless to say, all kinds of horrifyingly orgasmic wackiness ensues when the master foolishly leaves his horny young assistant in charge for a week. 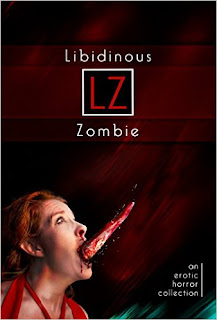 Posted by Terrance Aldon Shaw at 9:40 AM