Review of 'Cautionary Tales From the Edges' by Emmanuelle de Maupassant

Cautionary Tales From the Edges

This extraordinary collection of short tales is, at once, a celebration of the simple beauty of language, a colorful and sometimes terrifying glimpse into the grimly fatalistic heart of Slavic folk culture, and a highly satisfying work of sensually charged entertainment. These twelve stories range pleasingly in mood and atmosphere from the mysterious and macabre—reminiscent of Angela Carter’s treatments of traditional folk and fairy tales—to the broadly humorous, bawdy romps in the spirit of Boccacio, populated with loutish peasants, dirty old men, promiscuous milkmaids, and horny demons in varying degrees of malevolence, ghouls, ghosts, vampires, elemental sprites, and throngs of things that go bump in the magical night.

Yet, as the collection's title suggests, no story here is without an overt moral component, an appropriate comeuppance for bad behavior, just desserts for greed, lechery, and deceit, unfaithfulness, cruelty, murder—the whole catalog of sins, mortal and venial. The tales are narrated with the occasional poetic aside by the souls of the dead, collectively observing the realm of the living, commenting on human folly, sometimes with sadness, more often with a sort of wearily superior resignation as if to say ‘we see it all so clearly, yet the living make the same foolish mistakes again and again, and we, poor spirits, not wholly beyond care, can only watch, having forever lost the ability to intervene.’

Emmanuelle de Maupassant’s language is elegant and direct, never simplistic or condescendingly obvious in spite of occasionally meandering towards preciousness, at times a little too dainty—at least to my taste. The style is consistent—very important!—concise and to the point without venturing off on tangents. Throughout, I was happily reminded of those wonderful—and wonderfully old-fashioned—fairy tale collections from the earlier years of the last century (are there any readers here old enough to remember the original Childcraft series?) genuine literature that never patronized or talked down to its intended audience, never insulted the reader’s intelligence or dumbed down its content to accommodate the attenuated attention spans of addle-brained TV addicts.

The author has done a great deal of research into Slavic folkways, customs and cuisine, and clearly loves the material she is working with—an affection that shines through on every page. 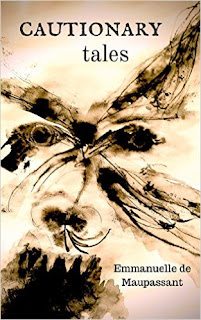 Posted by Terrance Aldon Shaw at 7:57 AM