So, let’s talk about Tampa. Not in the hushed, breathless tones of closeted embarrassment, as if we’d been forced to reveal a guilty secret long hidden. Not in the stale, dusty diction of ‘moral rectitude’ or the tongue-clucking, pulpit-pounding hyperbole of reactionary outrage. Let’s talk about this book as a piece of writing, as an example of a particular literary paradigm, as an effectively narrated story, and as an entertainment.

For a popular title regarded by many as a mere succès de scandale, one may be surprised to discover just how well-written much of Alissa Nutting’s debut novel truly is:

I knew I’d find it hard to cut the girls in my classes any slack at all, knowing the great generosity life had already gifted them. They were at the beginning of their sexual lives with no need to hurry—whenever they were ready, a great range of attractions would be waiting for them, easy and disposable. Their urges would grow up right alongside them like a shadow. They’d never feel their libido a deformed thing to be kept chained up in the attic of their mind and to only be fed in secret after dark.

When I stepped outside after my last class, the unfiltered afternoon sun was blinding. The bedlam atmosphere of the day’s end made the stoic brick walls of the junior high and all its false markers of imposed order—the perfect geometry of the landscaping, its immaculate semi-circles of wood chips bordered with green hedges and palm trees—seem like relics of a recently invaded and devoured civilization . . .

These qualities are fairly consistent throughout the text, though one may note less precision in vocabulary—the occasional jarring inaccuracy in word choice—in the penultimate mad rush towards denouement and climax. (This ‘creeping carelessness’ is hardly uncommon in books produced under looming deadlines. One sees it in the works both of independent and traditionally-published authors.)

[By the way, Ms. Nutting: Corvettes don’t have back seats—and if your heroine was trying to maintain a low profile, a Corvette of any vintage would be the most impractical thing she could drive around in with the possible exception of a Ferrari or a Lamborghini.]

Tampa is, first and foremost, a character study. Nutting’s Celeste Price is a calculating sociopath, an anti-heroine very much in the literary/filmic tradition of Jeff Lindsay’s Dexter or the character of Walter White in Vince Gilligan’s Breaking Bad. Readers will be aware of ‘what must occur’ from the very beginning, and are, thus, held in a protracted, ecstatic state of dramatic irony, knowing full well that this character’s development must inevitable follow a downward trajectory—that the moral expectations of the broader society be satisfied. Suspense will come in the form of speculation, trying to guess how and for how long this beautiful predator will evade capture, and what, ultimately, will be the cause of her downfall. Will one of her 14-year old student conquests be compelled by guilt to confess? Will she be found out by some adult in a position of authority? Will her husband become suspicious? Will she herself become too eager and give away the game? Do we, the readers, care enough about this woman to get butterflies in our stomach when she encounters a close call?

Many of the details in Tampa are borrowed wholesale from the 2005 story of Debra Lafave, a Florida middle-school teacher charged in one of the most notorious, high-profile statutory rape cases of recent memory. (The author had attended school with Lafave.) Yet, the narrative might have been set almost anywhere in the US. Predators lurk in big cities and small towns, tiny rural school districts and sprawling urban ones. A few manage to evade capture for years. Some are never captured or called out at all. Thus, there is a sense both of universality and disquieting familiarity—something uncomfortably close to home—in Nutting’s telling of this tale.

Many of the descriptions of sex between the adult predator and her underage victims are quite explicit—sometimes gratuitously so, as in the scene where Celeste, trying to regain the trust of Jack, her disgruntled ‘boy toy’, invites him to penetrate her anally (“giving him a treat”) on top of her desk. For the purposes of her story, the author ignores questions of agency and consent—except insofar as those issues inconvenience her anti-heroine. Nonetheless, many of these descriptive passages are effectively arousing, whether the author intended them to be so or not.  (Frankly, there is no shame in admitting this. Especially if one picks up a book with the desire to be titillated, it’s hardly fair to complain after the fact that one actually was turned on—though, I suppose, some people are capable of complaining about anything without the slightest hint of irony.)

As an assured, well-crafted piece of writing and as a sharply-observed character study. as a slickly-plotted adventure, right at home in the contemporary tradition of the anti-hero, as an accessible, relatably-narrated story, and as a surprisingly effective entertainment, Tampa is recommended. 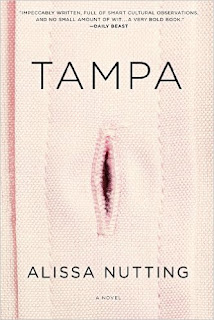 I’d been going back and forth in my mind about whether to review Alissa Nutting’s Tampa. Certainly, in reading this title, I had that old familiar sense of the imagination revving into the red zone—that frisson of near-absolute certainty when I know I won’t be able to resist the urge to share my thoughts about something I’ve read, listened to, discovered, or experienced. Yet, at the same time, some bureaucratic homunculus in another remote, dusty compartment of my brain was dragging its feet, drawling dully like Ben Stein in Soapdish or Ferris Bueller’s Day Off, “Are you suuuuure about that?”

And, of course, when I asked the folks at KDP to explain the reasons for their decision, they sent me an automatic ‘non-response’ to the effect that (1) I had broken their rules. “Please refer to our content guidelines.” (2) They would not tell me specifically which rule I had supposedly broken—frankly, their ‘content guidelines’ are so broadly written as to be utterly meaningless, in effect ‘you know what you’re not supposed to do . . .’ or ‘our rules concerning erotic content are’ “ . . . pretty much what you’d expect.” (3) I was further informed that if I ever broke their rules again—the ones they won’t cite specifically—they might go so far as to cancel my author account altogether.

My response to this treatment was to feel disappointment, anger, sadness, and depression in roller-coaster-like rapid succession. A good chunk of my income from writing derives from sales on the Zon, so it would not do to have my account banned. Then, too, I realized that I have a deep desire to communicate with readers. I want people to discover my books, to read them, to find meaning, enlightenment, entertainment and joy in them. I could live with reduced income, but to be cut off from my potential audience? That would be a kind of death. To simply work in isolation day in, day out, but not be able to share myself through my writing? To be forbidden ever to reach out into the wider world? To be rendered voiceless? For me, that would be a Hell far worse than anything Dante ever dreamed up.

What stings most deeply here is the sense that my work has been found wanting, judged and condemned by a transparently hypocritical double standard. If, in Tampa, Alissa Nutting can write explicit, anatomically graphic scenes of sex between a 26-year old teacher and her 14-year-old student, and not only have her book rocket to the top of the best-seller charts, but see that book prominently featured in Amazon’s advertising, what objection can there be to the content of my work, which actually endeavors to explore and acknowledge issues of agency and consent? If George R.R. Martin can write fairly graphic scenes depicting the 14-year-old Danerys Targarian having sex with Khal Drogo under the watching eyes of the whole Dothraki tribe, not to mention scenes of brother/sister incest—one of which takes place in a ‘church’ near the reposing dead body of said brother and sister’s son!—why the hell can’t I write and publish the relatively mildly graphic stories in Kiss-Off theDevil about mature 16- and 17-year-olds exploring their sexuality? Jill Solloway’s novella Jody K  is a brilliant glimpse into the mind of a 14-year-old girl at the dawn of sexual awakening—but what have I written that makes Birthday Girl, my story of a headstrong 15-going-on-16-year-old at a similar developmental stage—a story in which no sex physically occurs!—so much more objectionable?  Nabokov’s Lolita and Somerset Maugham’s Of Human Bondage are rightly hailed as classics though both reference acts which could be interpreted as statutory rape. What’s wrong with my gentle literary story of a lonely 16-year old boy with a speech impediment being led to manhood by the 28-year-old step-relative he adores in Summer of ’69?

Is the problem that I refuse to pass judgment on my fictional characters for behaving the way real-life people do every day? That I will not condemn my characters or punish them simply to satisfy the atavistic expectations of a few self-appointed, loud-mouthed ‘traditional family values’ crusaders—and certainly not the obsolete ‘Movie of the Week’ morality of an idealized world that never was? That I categorically reject any worldview that reflexively conflates ignorance and innocence?

Or does the fate of my books boil down to the same tired, old truth: that authors with name recognition, a vocal fan-base and a small fortune, or those operating under the aegis of a traditional mainstream publisher or the protection of an influential agent are more or less free to break whatever unwritten rule there is so long as their books promise to sell like the next GoT or FSOG?

I choose to write about erotic themes because I believe in the liberation of the human spirit. The spirit and the body cannot be free until we have unshackled ourselves from shame, and to break those fetters we must honestly, unflinchingly, examine ourselves, our wants, our needs, our drives, our emotions whether dark or sunny, the irrational roots of our inhibitions and fears, the terrifying wonder and awesome beauty of our sexuality in all its bewildering complexity. Sex is essential to the human experience and that experience doesn’t mystically commence on the morning of our 18th birthday. If an author is going to tell an authentically human story—a story with sufficient depth of truth, empathy and understanding—the sexual component of our human-ness must be acknowledged. Stories in which sex is ignored or redacted altogether are little more than fables to entertain the willfully infantilized.