This collection of seven longishly-belabored literary stories disappoints as often as it pleases: after slogging through to the end, I cannot escape the impression of a blandly competent author, seriously out of their depth. In tone and style, the stories in Arlene Heyman's Scary Old Sex have the feel of superannuated student exercises, assignments turned in for some late-sixties undergraduate creative writing seminar, aping the modishly arch nihilism of the day, every detail, no matter how trivial, unfailingly observed, with a cold clinical detachment and precious little sense of direction or purpose, Many of these pieces seem to have been taken out of mothballs, the hopeful typescripts dusted off after decades, lightly revised to a minimum standard of editorial presentability—whatever the hell that means in this post-FSOG day and age—and published to great fanfare, no doubt along with the percussive popping of half-a-dozen self-congratulatory champagne corks.

The project as a whole has a suspiciously cynical, mercenary pungence about it. Why should anyone be bothered to give a flightless fuck about yet another aging star-schtupper cashing in on her youthful relationship with a famous literary figure? It is no secret that Heyman, as a 19-year-old student at Bennington College, carried on a two-year affair with her professor, the middle-aged Bernard Malamud. No secret at all—in fact, much of the publicity for this collection centers on that relationship, a drably fictionalized version of which comprises the second story in the book. It might be one thing if Heyman’s writing was in the least bit inspired—it is not—insightful or profound or even remotely interesting—most of the time it is none of those things. Apparently authorial success is a matter of who you know—or, at least, who you once knew in the Biblical sense—and, having once caught the eye of the Great Man, every amateurish pecadillo is now effectively washed away in the blood of the lamb, and the “critics that matter” fall over themselves to hail a major literary event.  (Perhaps I’m growing cynical or senile in middle age, but I am rapidly coming to the conclusion that the New York critical establishment is easily titillated.)

Even in the two stories I came close to liking--Night Call and Artifact--there's little or no emotive range in these narratives. Bitterness and ennui are Heyman’s go-to emotions, and she goes to them with tedious frequency.  The female characters, whether young, old, or middle-aged, seem to have nothing better to do than break down and cry at the drop of a hat, or complain shrewishly about the lack of sexual satisfaction in their all-too-ordinary lives.  The men are emotionally clueless, shallowly articulate, and indifferently characterized—current husbands always coming up short against former dead ones. Children are the ever-present bringers of chaos, either too good or too stupid to live. Conflict amongst these ‘types’ too often feels forced and over-effortfully imagined.  Everybody has a torturously-detailed backstory that ultimately adds nothing to the reader’s understanding. Amateurish head-hopping, inconsistent point-of-view, lack of narrative direction or coherent structure, downright foolish attempts at getting into the heads of characters the author clearly knows or cares nothing about—in the end creating a soggy non-critical mass of who-the-hell-gives-a-healthily-introspective-termite’s-turd.

What disturbs and disappoints me most as someone who cares deeply about great erotic writing, is Heyman’s stultifyingly conventional approach to sexual subject matter, especially where ‘old sex’ is concerned. Where the hype has led readers to expect something revelatory, daringly paradigm-shifting in the literary exploration of geriatric eroticism, what we get is the all-too-familiar horror and disgust at the prospect of physical decay and declining performance, still measuring everything against the insipidly narrow, bourgeois vision of youthful health and beauty. In this regard, at least, the title of the collection is apt: as Heyman would have it, sex is scary—old sex is even scarier.

What a crock of crap! 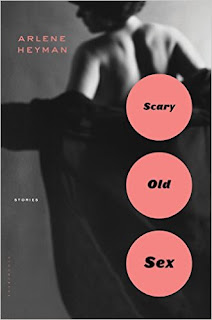 Posted by Terrance Aldon Shaw at 11:15 AM