Italian Sonata is set in 1899 at the cusp of the new century, a time of near-boundless optimism limited only by the obsolescent mores of the fading Victorian Age. A follow-up to Maupassant’s acclaimed first effort, The Gentleman’s Club, if anything, her style has become more assured, her language more fluent. The Italian setting is vivid and colorful with here and there a smattering of the native tongue to add a spicy dash of verismo. I like the strong-willed female characters; not so much modern-day ass-kickers like Buffy or Xena recycled in Victorian corsets and bustles, or anachronistic ‘proto-feminists’ like Philip Pullman’s Sally Lockhart, but equally adventuresome in their own way, thoughtful, curious, questioning, unwilling to accept the stultifying status quo just because “that’s the way things have always been done.” At their best, Maupassant’s heroines have genuine agency unlike so many of their airheaded counterparts in countless pot-boiling bodice-rippers and Regency romps. (I liked the way the future granny from Maupassant’s Highland Pursuits makes a brief cameo near the beginning of this novel, remarked upon for her independent, adventuring spirit. Very cute!) These women are fearless when they must be, finding depths of courage within themselves they never realized they possessed until the moment of crisis calls it forth. from hearts that are better than they know. When Maupassant sets up her romantic m/f/f triangle, we know who we want to see on top!

All so fine so far. Unfortunately, there are a number of troubling flaws in the fabric of this novel—amateurish oversights unbecoming a writer of Maupassant’s well-earned stature. Where to begin? Casual head-hopping and inconsistent points of view, not once or twice, but frequently; anachronism, though thankfully rare ("It was super to meet you..." In 1899 it might have been "grand" to meet someone, but super? Probably not so much), and the occasional confusing arrangement of episodes without sufficient set-up or transition, especially later in the book. All rooky mistakes that a competent editor would have caught and corrected immediately. Alas, there's more: poor pacing around rising action, set pieces either too perfunctory, with action seeming to come out of nowhere, or fuzzily drawn without explanations for why or how certain things happen (like the door to a chamber suddenly, and very conveniently, being "kicked open" for no apparent reason, and with nary a "kicker" in sight).

Maupassant’s philosophical digressions can be quite fascinating, but too many of them tend to inhibit the logical flow of action, so that, often, what ought to be the emotional high-point of a well-paced scene feels like deflated anti-climax. They can also feel forced, as if the author were using her characters to score ideological points rather than deepen the reader's understanding of inner conflict and motivation. (I am not a fan of the authorial "Mother Knows Best" voice.)  There are too many maddening examples of what I would call ‘exposition after the fact’ in which one character condescendingly explains “what just happened” or offers details of backstory that ought to have been foreshadowed or seeded in the reader’s mind much earlier on. (These passages have the stagy feel of old-fashioned melodrama, more quaint than helpful.) Add to this, the occasional example of jarring, artificial-sounding expository dialogue or inner monologue that read as if they had been deposited into the text almost at random.


As if all this weren’t enough, we are treated to contradictory character arcs, taking established traits and turning them around, if not ignoring them altogether. Yes, we admire the strong-willed women when they are allowed to be in character; but what are we to make of a heroine, having absolute proof of her would-be suitors utter unsuitability, vacillating and what-if-ing about marrying the monster anyway? (Shades of Anastasia Steele, unflattering to say the least!) And how are we to regard what is possibly the most disturbing turnabout-against-type in the entire novel: Madame Noire as a damsel in distress? Needing to be rescued by a MAN, after everything we learned about her character in the first novel? (It’s all I can do to keep my book-hurling reflexes in check!) Maude's dilemma—its cause un-foreshadowed, at least in this book—seems forced at best, an excuse to punch up action in the story without adding much real value to the whole. Narrative threads need to be taut after all; dramatic plotlines need to intersect dramatically, and these just seem to elide briefly before drifting off on their own flaccidly merry ways.

Meanwhile, Maupassant’s men—particularly Maude’s husband Henry—are shallowly drawn, their inner monologues, such as they are, one-dimensional, uninteresting and predictably plodding. Worst of all, after the brilliant, icon-busting, psycho-sexual revelation of The Gentlemen’s Club, this sequel seems to be reverting to the most disgustingly atavistic—dare one say Victorian?—notions about moral consequence; that a character, especially a female character, who is too free in their sexual attitudes and appetites must somehow, yet always necessarily, be punished for “enjoying it,” only truly happy once she’s been "brought to heel," domestically settled and married with children. Uggh! (Could Italian Sonata, in fact, be a cursory re-working of an earlier novel featuring these characters, one that predates The Gentlemen's Club?)

Many readers—particularly the ones who aren’t writers themselves—will have little difficulty glossing over these flaws, to the degree they notice them at all as the story carries them along. I read more deliberately than most, slowly and analytically with deep comprehension, and tend to catch everything—more’s the pity sometimes. As such, I try to seek out the very best writing if only for the sake of my sanity, so on that rare occasion when a good writer lets me down, it has the sting of a personal affront, if not an outright insult to my intelligence. My problem here is that I know damned well Emmanuelle de Maupassant can do so much better, because she has done so much better in the past.

Yet in the end, I do think that what’s good here far outweighs what's not. Italian Sonata is recommended, albeit with the serious reservations already noted. I wish I could endorse it with greater enthusiasm, but that would neither be honest, nor fair, nor helpful. 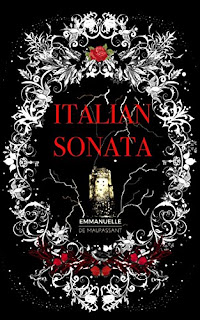 Posted by Terrance Aldon Shaw at 5:31 AM