is now available on Amazon Kindle. 16,000 words at $2.99 (USD); this title may also be borrowed free through Amazon Prime. (Be sure to check out the kick-ass cover designed by Sharazade and Andre SanThomas.)
Sixtysomething and seriously oversexed, Mr. Friday’s long overdue for a midlife crisis. The old man still has two or three items left to cross off his bucket list of ingenious kinks when he meets beautiful Sami Rosenberg; a smart-mouthed, vivacious nineteen-year-old college coed with major cash-flow problems and a boyfriend who bores her to tears.


When Mr. F offers an ungodly amount of cash for her to play the courtesan, Sami tells herself it’s all about the money. But more troubling questions persist. How far will she go to get what she wants? How deep do her inhibitions truly run? What’s the real price of a thrill? 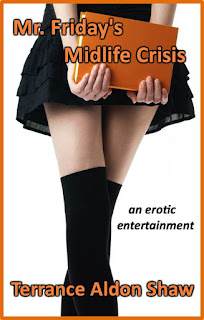 I’m not sure exactly when I heard it—late 2011 or early 2012—but I clearly remember following a piece that aired on NPR about the inconsistency of condom use in the developing world. One particularly pause-inspiring section of the story involved college coeds in Uganda; eighteen or nineteen-year-old women stepping out on weekends with their much-older sugar daddies; all with the full knowledge of the steady boyfriends left behind. This struck me as an intriguing premise for a story, though I would have to transpose the action to the more familiar turf of my native Midwest, which in itself would prove an irresistible challenge.

These ideas by themselves, while fascinating, weren’t quite enough to reach what I would call a narrative critical mass; the point at which a story takes on a life of its own, transcends the sum of its parts and achieves natural dramatic momentum. For that, I needed an ensemble of strong, memorable characters. I did not want to populate my story with nice, agreeable cardboard cutouts for whom everything has a way of working out just so with nary a hassle, all difficulties smoothed over with a fairy-dust sprinkling of cutesy coincidence or a mawkish movie-of-the-week moral tacked on at the end. Real, interesting people are not all-good or all-bad all the time; they are steeped in contradiction, animated by the need to overcome obstacles, perpetually piqued by their own intractable inner conflicts. A character who behaves the way we always expect is dull indeed.

The Mr. Friday of the title is based on someone I had the great misfortune to know years ago; selfish, bitter, arrogant to the point of megalomania; so thoroughly convinced of his ultimate damnation as to perceive no gain in being kind. And yet, he could occasionally surprise with bouts of spontaneous altruism and self-effacing humor.  A colorful conundrum to be sure. If anything, the fictional Mr. F has been toned down; his mood swings less histrionic; his internal contradictions not quite so complex; his motives greatly simplified. The fellow in the story is certainly more thoughtful, creative and generous than his real-life alter-ego, who would have been quite happy to bed a nubile young thing like Sami so long as it never threatened to cost him anything. In both cases, I think, the old men’s reflexive orneriness comes from their own unexamined insecurities; their cruelty to others rooted in deep self-loathing.

Less clear is where Sami comes from; this beautiful Amerasian-Jewish coed who speaks with the mildest hint of a southern drawl. My characters are often born in imagined conversations. Sometimes I’ll spend hours simply “transcribing” long stretches of dialogue, even before a story has begun to take shape. It’s a great way to get a feel for a character, to figure out what makes her tick, learn her endearing idiosyncrasies and foibles, all the while growing more familiar and comfortable in her presence. Admittedly, I tend to fall in love with my female characters, and Sami was no exception. I liked the way she talked; her smart mouth and self-effacing humor; her powerful sexual self-confidence and cultivated poise alternating with painful reticence and debilitating uncertainty. There’s a sweetness in Sam’s interactions with her roommate, Gwen; but there’s a callous side to her, too; no small measure of selfishness, and a serious mean streak. Being with Mr. Friday has a way of bringing out these darker tendencies in her, a fact she willfully ignores till it’s too late. I borrowed her beauty from several women I’d admired in Playboy over the years, and built her unusual background from diverse strands of experience—my own, and the freely shared knowledge of others'.


I’ve tried hard to make this e-book user friendly and easy to navigate with an active Table of Contents, Hyperlinks to and from the TOC, as well as active URLs to all my other product pages, blog and e-mail. An added feature in the TOC is the option to jump directly to some of the “juicy parts” in the book.
Let me know what you think.
cheers
TAS
Posted by Terrance Aldon Shaw at 1:02 PM