Wuthering Nights: An EroticRetelling of Wuthering Heights (Emily Brontë and I.J. Miller)
At first blush, Wuthering Nights seems more like a clever marketing concept than an authentic literary inspiration; yet another symptom of the terminal herd mentality infecting contemporary corporate publishing. Certainly, in the hands of a less-accomplished writer such an ambitious undertaking might have proven mediocre, if not downright disastrous, and, given the depressingly vast glut of second-rate, copycatted BDSM-centered erotic romance currently on the market, probably eluded notice altogether. But I.J. Miller at his best is no ordinary writer. In a respectable body of published work that includes novels like Seesaw and Whipped, as well as the very fine short story collection Sex and Love (soon to be reviewed here), Miller has demonstrated a talent for probing psychological complexity, often revealing the pain and poetry of dysfunction in surprisingly entertaining ways. If Wuthering Nights was to be published in any case, Miller was the logical—and, as it turns out, fortuitous—choice for the project.


And if ever there was a novel with erotic potential, it is Wuthering Heights, that sprawling, soapishly addictive saga of passion and pain, unrequited love, misery, cruelty, madness and revenge. Brontë’s Heathcliff is probably one of the most ingeniously conceived, complex, and complete characters in all 19th century English literature; the ultimate archetypal “meta-male”; virile, magnetic and implacable, handsome, dark and dangerous. Only Catherine can match him for impulsiveness and the sheer intensity of her passions; she is the great grandmother of all those quirky, headstrong heroines populating the Contemporary Romance section, cloned and copied a thousand times a month. Of course, in their day Victorian-era propriety, enforced reticence, and the society’s obsessive-compulsive need to moralize precluded any possibility of explicit consummation, a thing not even acceptably left to the reader’s imagination—until now.


To some, seeing these familiar, well-beloved characters getting “down and dirty” may be akin to the discovery of one’s parents in flagrante delicto, a difficult thing to accept at first. One might experience mild pangs of distaste followed by a fevered moment or two of denial. But readers mature enough to understand the difference between innocence and ignorance—a distinction intentionally blurred by the Victorians and still muddied by their philosophical heirs even to this day—will be rewarded. Deep down, we’ve always been curious about Heathcliff and Catherine; Isabella, and even Nelly; daydreaming about “what really happened” behind Brontë’s straight-laced curtain of prettified euphemism.


But, while intentionally “sexing up” the story, Miller has retained each character’s broad biographical arc and unique psychological profile so that we may still care about them and feel with them as more than mere objects.  He has achieved this largely by keeping Brontë’s language and style intact. I jumped back and forth on my Kindle between Miller and Brontë from time to time, finding on the whole a near-seamless consistency. Here is a taste of the original, Wuthering Heights, excerpted at random:


The stolidity with which I received these instructions was, no doubt, rather exasperating, for they were delivered in perfect sincerity; but I believe a person who can plan the turning of her fits of passion to account, beforehand, might, by exerting her will, manage to control herself tolerably, even while under the influence. I did not wish to “frighten” her husband, as she said, and multiply his annoyances for the purpose of serving her selfishness.


(Nelly seems quite well-spoken for a country servant girl from 19th-century Yorkshire, doesn’t she?) Here is a similarly reflective moment from Miller’s Wuthering Nights, related in the third person:


She (Nelly) knew better than to provoke Heathcliff when he was in this state, but Cathy was not so well educated to his demeanor. “Are you mad?” the lass exclaimed.


Perhaps so, thought Nelly, but if so, it was a madness peculiar to him that she knew too well, for he was one who took pleasure at invoking his physical presence to achieve his ultimate goal, which, as always, was having his way.


So far, so good. It’s when we get down to the details of the newly added “juicy parts” that things become a bit more problematic. How does one write explicit scenes employing vocabulary from an era best-remembered for its prudery? Doing so successfully requires painstaking attention to linguistic and historical detail along with engaged, thoughtful, erudite editing. Unfortunately, the language in these scenes has been colorized by modern genre convention, weighed down with careless anachronism (such as, among other things, repeatedly referring to “nickers”), and a tendency towards erotic hyperbole. Here, by way of example, is an excerpt from the scene of Heathcliff and Isabella’s wedding night:


Seductively he pulled back his shirt and revealed again the full manliness of his chiseled torso. He shook his long black hair out of his eyes, and it was with great willpower that she did not give in to this sensuous action and rush to his arms. He enjoyed her reaction to even his slightest of movements, enjoyed the power each part of his body held over eyes as they remained transfixed. He unbuttoned his pants, but hesitated. She realized she had been staring, frozen, at the bulge between his legs and did not look up until he laughed, causing renewed blush at her eagerness to feast her eyes on this grand rooster.


“You will learn to enjoy the pain.” He delicately cupped her full breasts, sensually kneading them with his strong hands, and she closed her eyes and swooned slightly. He licked along her earlobe, letting his hot breath brush against her neck. “Yes, my love,” she whispered . . .


“That’s it, Isabella. Don’t fight it. Give in to your body and more gratification than you ever dreamed of will be yours.”


Oh please! Must every detail of Heathcliff’s physique repeatedly be described as “incredibly” this or that, chiseled, long, huge, thick or what have you? Must Edgar always suffer by comparison, the Romance-genre stereotype “sweet guy” with a sensitive soul and a tiny dick?  And why must the intimation of female pleasure always be “like nothing she had ever known before”? One might expect this sort of tiresome purplish prose in any humdrum mass-market bodice-ripper; it’s lazy and it’s boring, and it undermines the uniqueness of these characters, reducing them, in the bedroom or dungeon, to carnal caricatures, one-dimensional automatons motivated solely by sex.


Yes, it’s a clever idea—if not much of a stretch—to turn Heathcliff and Isabella’s relationship into a freak show of D/s codependency, complete with public humiliation and a fully-accessorized dungeon in the cellar of Wuthering Heights. So why not describe it in a way that truly makes it feel “like nothing ever before”?  Miller is clearly capable of better. (One suspects his editor didn’t much care about correct vocabulary or authentic period detail so long as the manuscript came in on time with the requisite percentage of gratuitously sweaty beefcake and damsels swooning at the sight, fingers firmly planted on throbbing quims. Still, whether this kind of mediocrity was due to commercial or temporal constraint is beside the point.)


Where the sex scenes are overly stylized in much of the book, they virtually disappear towards the end. Things cool off considerably in those latter sections dealing with the relationship of the cousins, Cathy, Linton and Hareton. The explicit content is noticeably toned down, the sexual tension slackened. By comparison with what has gone before, the last quarter of the book feels positively chaste. (Due, perhaps, to the publisher’s squeamishness about “incest” issues, though, ironically, no such qualms seemed to have affected the early Victorians.)


“For you see,” she continued, “you showed that true repentance is when the inner soul recognizes the path to true redemption and acts accordingly. Until this happens the person will be blind to all opportunities.”


Ultimately, the loose ends in the plot are tied up quite well. In some ways Miller’s ending is more satisfying than Brontë; it is certainly more melodramatic, and he even manages, at the last, to out-moralize the vicar’s daughter from Haworth. 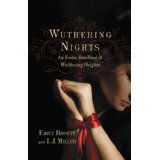 Posted by Terrance Aldon Shaw at 8:20 AM