Readers who enjoyed the storyline in E.L. James’ Fifty Shades of Grey even as they held their noses at the writing itself, may now take a welcome breath of fresh air. With this new series, James Wood gives us an engagingly sexy BDSM romance framed in beautiful, elegant prose. No roaring inner goddesses here; no titans of industry working through their childhood traumas; no dilettante self-indulgence. Far from the synthetic grandiosity and hyper-inflated operatic emotionalism of Fifty Shades and its lemming-stampede of imitators, Wood’s settings and characters are pleasingly ordinary, down-to-earth and always believable.  Though the when and where of the narrative are kept intentionally vague, as if locked in a kind of Pleasantville time warp, this only adds to the sense of intimacy.


The story is divided into three more-or-less equal parts; Seduction, Surrender, and Submission, each chapter tantalizingly brief on its own, comprising altogether little more than a very short novel.  (The three installments were published one by one over the course of several months, with Submission appearing in February of 2013. Each part is now available separately in e-book format, or can be found together in a single omnibus paperback edition.)


In Seduction, Wood invites us to share in his heroine’s journey of sensual discovery. Still hiding in her shell after the dissolution of a long and unfulfilling relationship, Paula moves back to her hometown to live with the aunt who raised her. We look in on the young woman’s unbidden fantasies, born of frustration and loneliness. We watch her growing fascination with a handsome neighbor, which soon takes on an innocently obsessive quality, manifested in voyeurism and, ultimately contact, capture and seduction.

Surrender ushers readers into an intoxicating, terrifying, sublime world of uncharted erotic intrigue, where lovers abandon themselves to the sheer joy of carnal novelty, eager to learn each other's secrets. The title itself takes on deeper meaning as Paula begins to discover her place in this brave new world; her deepening relationship with the handsome writer, Max Broekner, her initiation into his very genteel practice of ethical bondage and submission, a stylized theater of manners more apropos the Edwardian era than the early years of the 21st century. (Sufficiently intrigued readers may want to seek out Wood's The Doctrine of Venus, a sort of primer to the author's unique vision of the BSDM lifestyle.)

Indeed, Wood's language and style evoke earlier, more elegant times, though he is intentionally cagey about the exact when and where of this story. It seems to occupy a sort of alternate reality; a falsely remembered realm of nostalgia in which things exist as the author would wish, not as our own mundane existence might dictate. Descriptive passages are infused with a glowing appreciation of sensuous antique luxury, reveling in opulence and tactile wonder, when polished oak takes on its own strange erogenous power, the texture of fine Dresden china the stuff of fetish, and the aroma of old books becomes an aphrodisiac in and of itself. 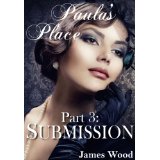 Submission delivers on the promise of the earlier chapters with a fittingly steamy climatic scene. The pacing throughout the series is subtle but effective, like the long line in a classical symphony, building cumulative momentum through the transition from idea to flesh, fantasy to reality; voyeurism to participation, all with a consistent well-calculated tension resulting in maximum impact. 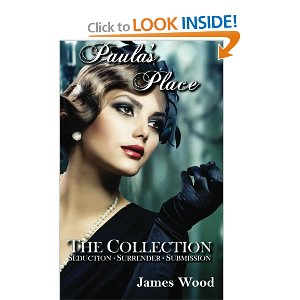 Posted by Terrance Aldon Shaw at 11:09 AM