The publication of something new from none other than Anaïs Nin is itself the stuff of stories, akin to the live capture of a unicorn, or, at the very least, the discovery of long-buried pirate’s gold. It is an occasion to rejoice and once again make pilgrimage to the shrine of that great mother-goddess, the self-described “madame” of modern literary erotica. What a transcendent thrill to hold this book in one’s hands and read that glorious, hypnotically rhythmic, dream-spinning prose that was and is like nothing else.

What we know and take for granted today as literary erotica would be utterly unimaginable without the work of Anaïs Nin. Yet, as editor Paul Herron tells us in his concise, densely informative introduction to Auletris, the author “didn’t take her erotic writing seriously…” Famously paid a dollar a page by a private collector for her now-classic tales, the writing of which she rather dismissively likened to forays into “literary prostitution”,  Nin’s erotica was heavily edited for posthumous publication. Delta of Venus appeared in print shortly after the author’s death in 1977. Little Birds followed in 1979. One of the stories in Auletris is the unedited version of Marcel, which appears, severely pruned back, in Delta of Venus. The other story in this new volume, Life in Provincetown, has never before been seen beyond private circles: only five copies of Auletris were produced, the original typescript and four carbons, which were “bound into books by the Press of the Sunken Eye” in 1950. This new edition, according to Herron, “is reproduced as it appears in the original (typescript) minus misspellings, typos, and minor formatting problems, allowing the reader to see Nin’s words as they were intended for the collector.”

And what extraordinary words they are! Everything we have come to love and revere in Nin’s work is here: the writing is, by turns, poetically inspired, sublime, sensuous, cerebral, steamy, trangressive, disturbing, psychologically searing, and joyfully sumptuous in its amoral abandon. As in this passage from Life in Provincetown, a kind of prose-rhapsody on themes of sexual frustration and voyeurism:

She laughed like someone plunging into too cold water, and gasping, and then feeling the warm reaction and the new sensation… She laughed as if pleasure were new and beginning to invade her. Ah … ahh … came her voice in the darkness. If he could have seen her move he would not have been as clearly aware of her pleasure. He felt this pleasure of hers rippling through his muscles. The walls were so thin he could feel it all in his body. Ah … ahh … There was a silence. This silence disturbed the Portuguese more than anything. What could keep her so still after her rippling and open pleasure? What caress could silence her suddenly, as if too profound to cause an exterior proof of joy?

Or this from Marcel:

[Note: Happily, Amazon has now released this title from the unsearchable oblivion of its 'adult section' after wasting over a week in a misguided and utterly hypocritical effort to censor, suppress, and limit access to the book.  The title is readily accessible from Barnes and Noble and other sources. See this insightful commentary on censorship of the book, as well as further information about these issues at Skyblue Press.] 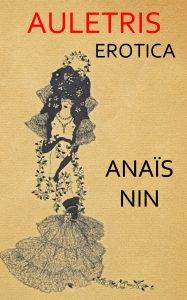 Auletris: Erotica (from Amazon)
(or from Barnes and Noble)

Posted by Terrance Aldon Shaw at 9:22 AM